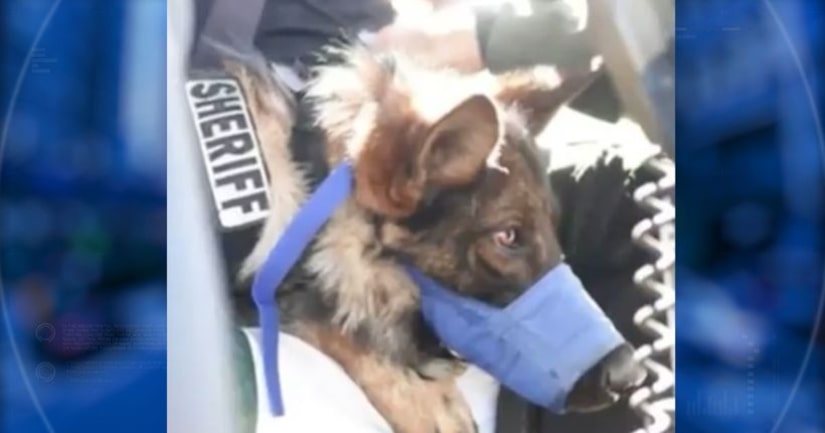 CARMICHAEL, Calif. -- (KTXL) -- A Sacramento Sheriff's Deputy K-9 is in recovery after being stabbed in the head multiple times following a pursuit.

Jedi has been a cop for a year and a couple months. His teammates at the Sacramento County Sheriff's Department hope he will be a cop again, soon. Jedi came out of emergency surgery tonight for stabs and cuts he took to his head and around his eye.

"When you see you K-9 partner injured, I can attest to it, it's an extremely difficult situation," said Sgt. Shaun Hampton of the Sacramento County Sheriff's Department.

Around 11:40 a.m. Saturday, a West Sacramento parole agent notified the Sacramento Sheriff's Department that Jackie Burke was wanted for domestic violence and may be in their jurisdiction.

The 41-year-old, Burke, is a convicted sex offender in Sacramento who is currently under GPS ankle monitor supervision.

Deputies tracked down Burke to the area of 4500 Hackberry Lane in Carmichael.

When deputies attempted to stop the suspect, he fled and lead deputies on a low speed pursuit that eventually ended near a senior living home at 8350 Fair Oaks Boulevard.

The parolee then claimed to officers he had a gun. When officers attempted to negotiate with Burke, he did not surrender.

"Upon exiting the vehicle [Burke] was concealing one of his hands as if he was armed. Our officers were able to engage him with a less lethal shotgun bean bag round. He was struck with one bean bag round," said Hampton.

That is when Jedi went in. Deputies say what Burke had been hiding in his hand was a knife they recovered after Burke attacked Jedi. He was taken into custody without doing any harm to the human law enforcement officers. 3-year-old Jedi, was rushed to surgery.