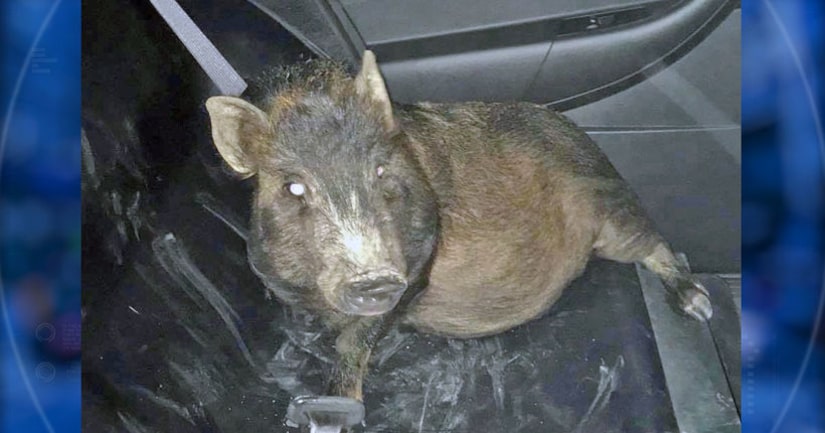 NORTH RIDGEVILLE, Ohio -- (WJW) -- Imagine a police officer receiving this call: “Help me. I'm being followed by a pig.”

We're not sure of the exact wording, but that's pretty much what happened in North Ridgeville early Saturday morning.

Police say a man called the station just before 5:30 a.m., saying he was being stalked by a pig on Center Ridge Road.

They thought he was drunk, but when officers responded, they found the man to be stone-cold sober. You know what else they found? The pig.

An officer managed to move the pig into his cruiser, where the animal was taken to the station and placed into one of the dog kennels.

Eventually, the pig's owner came to pick it up.

From the North Ridgefield Police Dept.:

"We received a call from a male who stated that he was walking home on Center Ridge from the Train Station in Elyria. He went on to state that he was being followed by a pig and didn't know what to do. A pig. Riiiight.

"Night shift responded to the obviously drunk guy walking home from the bar at 5:26 in the morning. He was at least drunk enough to call the police on himself while hallucinating.

"Upon arrival, they found a very sober male walking eastbound on Center Ridge near Maddock Rd. from the actual Amtrak train station in Elyria, not the bar. Oh, and he was being followed by a pig.

"Ptlm. Kuduzovic managed to wrangle (I think this is the correct word to use) said pig into his cruiser and he is currently secured in our pig pens.....er, dog kennels. Whatever.

"Also, we will mention the irony of the pig in a police car now so that anyone that thinks they're funny is actually unoriginal and trying too hard.

"Have a great day.

FULL STORY: Man to North Ridgeville police: Help me … I'm being followed by a pig - WJW