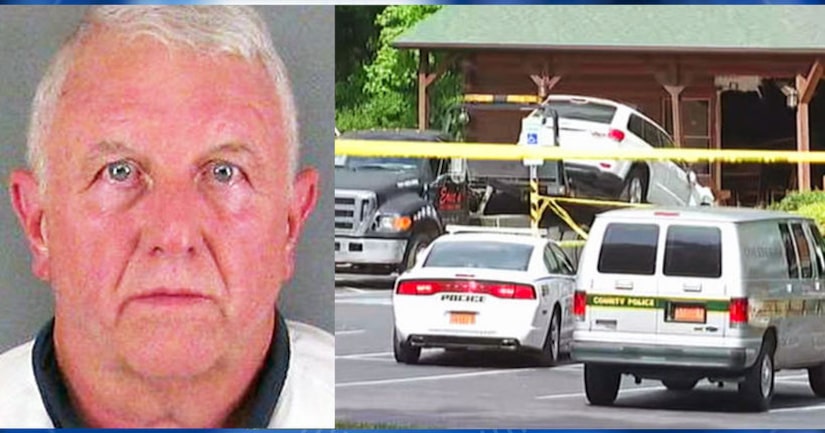 BESSEMER CITY, N.C. -- (WSOC) -- At a news conference Monday, the pastor for a man accused of intentionally plowing his car into a Bessemer City restaurant, killing two family members, blamed the incident on severe mental illness.

Austin Rammell, pastor at Venture Church, said "there is no way the man I've known for 16 years could do this."

Families were sitting down for a comfortable lunch when chaos ensued Sunday afternoon at the Gaston County restaurant. Two people died and others were injured when Roger Self drove his Jeep into the Surf and Turf Lodge just after noon.

Police said Self was taken into custody. He faces two charges of first-degree murder.

Police said that after their initial investigation, they believe Self, of Dallas, intentionally drove the Jeep through the restaurant on North 14th Street.

Officers said one of the victims was identified as Self's daughter, Katelyn Self, 26, who was a Gaston County sheriff's deputy.

The other victim was identified as Amanda Self, Roger Self's daughter-in-law, according to Rammell.

Other family members were also injured, according to police, including Amanda Self's 13-year-old daughter and Roger Self's wife, Diana.

They are expected to recover.

Wait staff told Channel 9's partners at the Gaston Gazette that Self took his family into the restaurant and had them seated. He then excused himself, went out to his vehicle and drove it at a high rate of speed into the area where they were sitting.

Rammell said he saw the entire family in church Sunday morning, just a couple of hours before the horrific attack.

“I'm just trying to encourage them,” Rammell said. “This was not a conscious act by their father and they know that.”

Rammell said Roger Self has been dealing with mental illness, including anxiety, depression, and mental breakdowns in recent months, and he had sought medical help.

“Family has been loving him through this,” Rammell said. “He's been taking precautions. He had all the guns removed from his house, so he was taking steps that were rational steps."

Rammell said he was set to officiate at Katelyn Self's wedding to her fiance, Alex, in September.

The pastor said Amanda Self, Roger Self's daughter-in-law, who was also killed in the attack, was an emergency room nurse at CaroMont Regional Medical Center and the mother of two.

"There's nobody in the world Roger loved more than those people and they know that,” Rammell said. “Even in the most chaotic, senseless, moment like this, they at least cling to the confidence that they know where Kate and Amanda are."

Rammell said that, within hours of the tragedy, church members gathered at Venture Church for a vigil for the family.

Caleb Martin, a 14-year-old who buses tables at the restaurant, witnessed the car crash through the building.

"I walked over to my station and I heard a loud boom,” he said. “It went straight through. There's a doorway. There is a wall and he drove in another room."

Caleb was dazed by the carnage he saw. He said that, for a moment, he didn't know what to do but then he sprang into action.

"The one guy I could help in back, he was pretty hurt,” Martin said, “I helped paramedics move tables off this dude and I moved debris out of the way so they could get to him."

Officials said Roger Self is a private investigator who worked for the Gastonia Police Department years ago.

Police said all of the victims, and Roger Self, are known to the employees at the restaurant.

"He was a regular and we haven't seen him in a while, so when he came back, it was kind of sad,” Martin said.

Law enforcement agencies from across the area expressed their condolences on social media.

The Huntersville Police Department posted on Twitter, “Our thoughts and prayers go out to the Gaston County Sheriff's Office and the family and friends of Corporal Katelyn Self. Corporal Self was senselessly killed today while off duty."