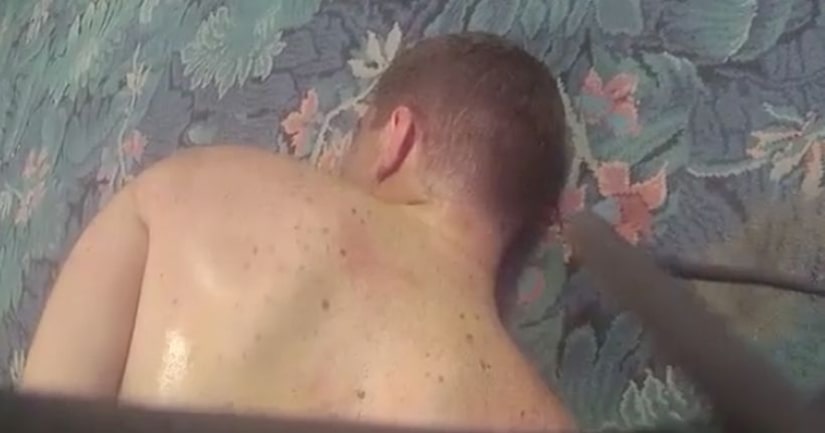 DAYTONA BEACH, Fla. -- (WPTV) -- A naked man who was taken into custody for trying to get onto a tarmac through the baggage carousel at a central Florida airport claimed a bomb was planted in a restroom, forcing the airport's evacuation on Friday.

No explosives were found at Daytona Beach International Airport, said Volusia County Sheriff Michael Chitwood at a news conference after passengers were allowed to go back inside the airport.

Instead, deputies found the man's clothes in a backpack hidden in some drywall in a restroom under construction.

"This is one of those things where truth is stranger than fiction, to say the least," Chitwood said at a news conference, several hours after the airport was evacuated.

The man, 25, was taken to a hospital for a mental evaluation. The sheriff said he had taken drugs the night before and would likely face several federal charges. He wasn't a passenger on any of the planes' manifests, Chitwood said.

A couple hundred people were at the airport at the time of the evacuation. Bomb-sniffing dogs searched the airport before passengers were allowed back into the terminal.

No flights were canceled, just rescheduled, and passengers had to wait outside the airport for about an hour and half, said Jay Cassens, an airport spokesman.

No flights were landing at the time of the evacuation, and passengers were about to board two planes set to take off. Those passengers had to be rescreened, Cassens said.

Deputies were called to the airport around 6 a.m. The man had arrived at the airport with his clothes on but emerged from a bathroom naked, Chitwood said.

Deputies used their taser guns to subdue him after he got on the baggage carousel. After he was taken into custody, he began shouting, "'We've got to get out of here. The bomb's going to go off. I planted a bomb in the bathroom,'" Chitwood quoted him as saying.

After searching the restrooms, a deputy found something hidden in some drywall in a bathroom under construction, the sheriff said. A robot was brought to the airport restroom and the item was found to be a backpack with the man's clothes.