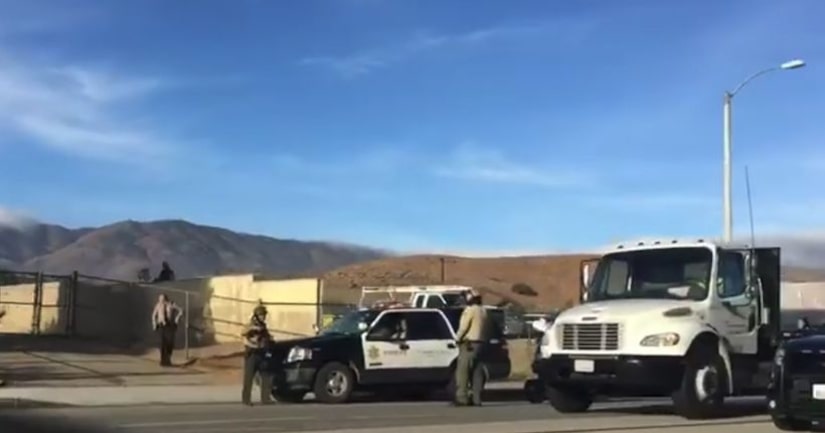 UPDATE 10:11 a.m. PT : A 14-year-old student is being detained after shooting another student in the arm with a rifle at Highland High School in Palmdale Friday morning, the Los Angeles County Sheriff's Department said.

PALMDALE, Calif. -- (KTLA) -- One person has been hospitalized and another detained after a man was reported with a gun at Highland High School in Palmdale Friday morning, authorities said.

Deputies were sent to the school located in the 39000 block of West 25th Street after receiving a report of a man with a gun on campus, Los Angeles County Sheriff's Department Sgt. Bob Boese said.

The incident was reported at about 7 a.m., the Sheriff's Department stated in a tweet.

The school was "cleared by deputies," the department said about 9 a.m. An active investigation was ongoing.

At about 8:15 a.m., the Sheriff's Department tweeted that they had one person in custody in connection with the man with a gun report. The suspect, a male, was apprehended near Vons grocery store in Palmdale, CNN reported.

Bureau of Alcohol, Tobacco, Firearms and Explosives officials were responding to a shooting at the school, the agency tweeted.

The activity sparked a frenzy on social media and in national news media, with repeated use of the term "active shooter," though authorities told KTLA they were not describing the situation that way.

All of Palmdale School District's campuses were on lockdown "until the situation is confirmed as safe for our students, teachers staff and parents," Maldonado said.

A concerned parent waiting near the school for her son said that she got a text from him saying he heard a gunshot and that he had locked himself in a classroom.

She said her son was still at the school and she was waiting to hear updates about when he was going to come out.

“It's scary, I don't know what to feel,” Ana Salazar told KTLA. “It's something I never expected to happen.”

Meanwhile, the Sheriff's Department searched the campus of Manzanita Elementary School in Palmdale, about 6 miles east of Highland High, after a report of "shots heard."

FULL STORY: 1 hospitalized, 1 detained after a report of a man with a gun on campus at Highland High in Palmdale - KTLA