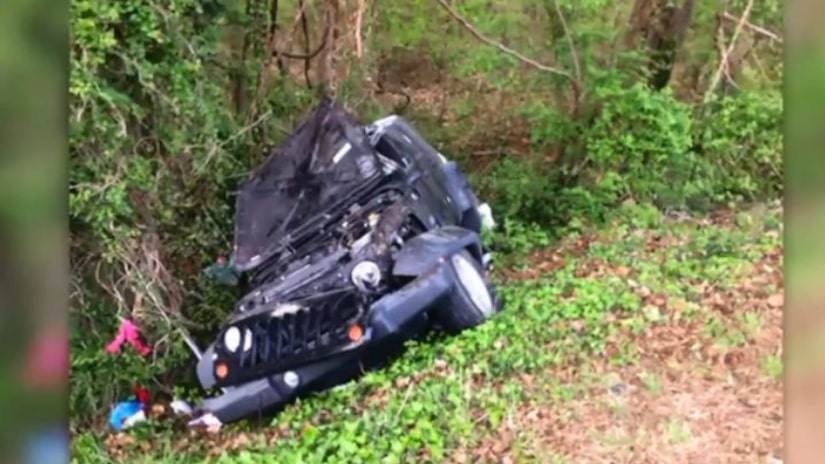 HIGH POINT, N.C. -- (WGHP) -- On April 21, High Point firefighter Dustin Reid responded to a call he would never forget, describing it as a "total nightmare."

Police reports say investigators believe Kenneth Gordon overdosed while driving a 2000 Chevrolet Silverado and merged onto Business 85 off the Brentwood Street ramp heading south, causing a wreck with a 2008 Jeep. Reid's wife and two young children were inside the Jeep.

Reid pulled up on the call, knowing his wife was actually on her way to see him at the station.

"Any firefighters worst dream," he said. "To see your wife and kids and the vehicle badly smashed. Thank God that they were fine."

One of the nearly dozen people who called into 911 describes the crash and a close encounter with Gordon.

"He ran through the light, he almost hit us," the witness told 911 operators. "He jumped on the highway haulin' boogie, and then he smacked this lady and put her in the woods. And now he's saying that he had a seizure, but he's actually ODing."

The crash report estimates Gordon was going about 65 mph during the impact, which is illustrated as right at the bottom of the ramp onto the highway.

"We're very blessed, my kids they were fine, not a scratch, I mean they were in good car seats," Reid said.

Reid's wife told police she tried to move out of the way into the left lane, but Gordon was coming in too fast and hit her bumper, spinning and overturning her car into a ditch. She was taken to the hospital to check out a sore knee and her kids were unharmed, according to the report. Weeks later, Reid says they're doing much better, but still shaken up.

Gordon was not injured in the crash.

"There were a bunch of people that stopped to help me and they left before we got to say thank you, but if they're watching this, just tell them thank you," Reid said.