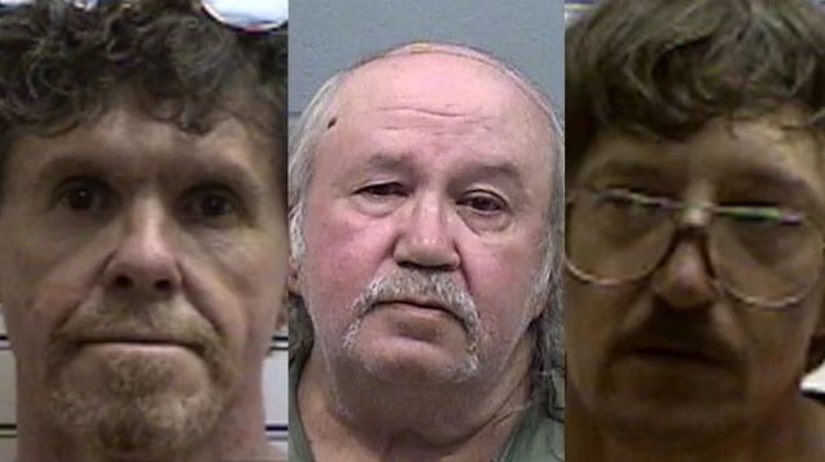 Lauria Bible and her friend Ashley Freeman, both 16, disappeared on December 30, 1999 from Welch, Okla.

Lauria was at Ashley's home for a sleepover.

That night, the Freeman's mobile home went up in flames, and the charred remains of Ashley's parents, Danny and Kathy Freeman, were found inside.

Danny and Kathy both suffered gunshot wounds to the head, an autopsy showed.

But Lauria and Ashley were nowhere to be found.

For years, agents and many other investigators followed numerous leads, interviewing a multitude of possible witnesses and suspects while searching wells and other possible burial sites.

In December 2017, officials said they discovered new leads that could be a turning point in the case.

Those notes and documents have proven extremely valuable.

The probable cause affidavit states the documents contained “some information pertaining to Warren Phillip “Phil” Welch II, David Pennington, and Ronnie Busick, as being involved in the murders and missing girls. The crate also contained names of individuals that may possess information.”

An OSBI agent and District 12 District Attorney's Office investigator interviewed several people who possessed knowledge about the murders and the missing girls.

Through those interviews, investigators determined Welch, Pennington and Busick murdered Danny and Kathy Freeman, set their home on fire, and kidnapped Ashley and Lauria, and eventually killed them as well.

More than 12 people kept their mouths shut about the murders

Court documents reveal more than a dozen people said they knew or had even seen evidence of the crimes.

More than a dozen interviews are cited in the probable cause affidavit.

Many of those interviewed apparently dated and lived with the accused men.

All of the witnesses said either Phil Welch, David Pennington, or Ronnie Busick bragged about the murders, and threatened to kill anyone who went to police.

Welch and Pennington were allegedly known to cook methamphetamine together, and several of those interviewed reported the three killed the Freemans over money owed for drugs.

A woman identified as TW lived with Phil Welch in the months following the murders.

She stated she heard conversations between the three men in which they implied “the people 'who were killed in Welch, Oklahoma, had owed them money and had been murdered for that debt. They had taken the two girls that were missing from Welch with them and eventually killed them. Pennington and Busick indicated they had set fire to the home of the murdered people.'”

She also told police she discovered Welch had briefcase full of Polaroids of the girls bound and gagged with duct tape, lying on a bed she recognized to be his, and “in some of the Polaroids she observed Welch lying next to the girls.”

TW told investigators she confronted Welch about it and he told her, “don't you ever tell anybody or you will end up in a pit in Picher (OK) like those two girls.”

A friend of TW, identified as CM in court documents, said TW showed her a Polaroid of the two girls on a bed, bound and gagged, facing each other, and said they looked “emaciated.”

She said Welch threatened to kill her and her children several times, and throw them in the same pit as the two girls.

A woman who lived with Pennington, identified as LE told investigators he talked about the missing girls all the time she was with him.

The affidavit states LE said he called it a “bad drug deal,” and that he “told her that if she ever left him that he would kill her too.”

RE, the son of LE, told investigators while he and his mother were living with Pennington, Welch and Pennington showed him the Polaroids of the girls and “told him that they killed the girls by strangling them.”

Witnesses reportedly overheard Welch and Pennington talking about the girls and said “if they wouldn't have taken off running…they would still be alive.”

A man identified as RH said Busick admitted to him his involvement in the murders and the missing girls.

According to the affidavit, RH stated that “Busick told him about how the girls were tied up in a trailer house in Picher where they were raped and tortured.”

He said Busick told him Welch was the shooter the night the Freemans were killed, but that Busick and Pennington stayed behind and started the fire.

RH said Welch threatened to kill him as well.

A man identified as JR was interviewed while he was incarcerated, and told investigators he walked into a trailer while Pennington, Welch, and Busick and one other unnamed man were looking at the Polaroids of the girls.

Others interviewed include friends of one or all of the men accused, friends of their lovers, and even Pennington's brother.

No one investigators spoke to could say where the Polaroids are today.

Some witnesses reported they were told by the three men the girls were thrown in a pit, others that they were dropped down a mine shaft in Picher, “later covered in concrete.”

Witnesses told investigators that Welch had nailed the teens' missing poster to a wall of his mobile home.

FULL STORY: What we know about the three men accused in the case of Oklahoma girls missing since 1999 - KFOR