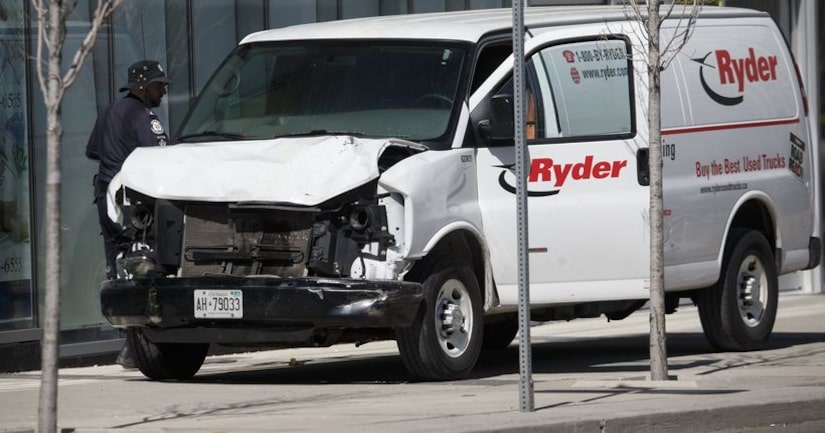 TORONTO -- (KTLA) -- Alek Minassian, the man suspected of plowing into pedestrians with a van Monday, was charged Tuesday with 10 counts of first-degree murder in a Toronto court.

The 25-year-old is also charged with 13 counts of attempted murder.

Minassian, who was wearing a white jumpsuit with his hands cuffed behind him, appeared attentive during the brief hearing. His next court appearance will be a bail hearing on May 10.

Investigators are still trying to determine the motive behind the attack, which left 10 people dead and 15 hurt.

"Obviously all Canadians continue and will continue to have questions about why this happened, what could possibly be the motive behind it," Canadian Prime Minister Justin Trudeau said Tuesday.

So far, officials aren't calling the attack an act of terrorism. "There would appear to be no national security connection," Canadian Public Safety Minister Ralph Goodale said.

But Toronto Police Chief Mark Saunders said "it's very clear just from a general perspective to say that the actions definitely look deliberate."

The van sped down a busy street Monday with reckless abandon, swerving into the wrong lanes of traffic and careening onto a sidewalk.

Minassian was arrested in a white rental van less than 30 minutes after police received a 911 call, Saunders said.

He said Toronto authorities hadn't had previous contact with the 25-year-old suspect. But a US law enforcement official with knowledge of the matter said Minassian was known to authorities.

A message posted on the account earlier Monday read: "All hail the Supreme Gentleman Elliot Rodger!"

Campbell said investigators believe the post refers to the man who killed six and injured 14 in a drive-by shooting and vehicle ramming attack near the University of California Santa Barbara campus in 2014. Rodger later died from an apparent self-inflicted gunshot wound.

Investigators said Rodger was motivated to carry out his attack by a personal grievance related to his immersion in the extremist ideological subculture of men's rights activists, who believe women don't actually want gender equality and have been brainwashed by feminist propaganda.

A mile-long scene of carnage

Ten people were transported to Sunnybrook Health Sciences Centre and two were declared dead at the hospital. Five patients there were in critical condition. Two other patients were taken to St. Michael's Hospital, but their conditions are unknown.

'Scene from a war zone'

Diego DeMatos was one of the good Samaritans who tried to save victims.

"Blood started gushing out of his head, and she was bleeding really badly, too," DeMatos told CNN.

At first, he thought the collision was a hit-and-run. But then he noticed four to five victims on the ground as he drove a few meters further.

DeMatos said he stopped to help another victim, who was already being aided by someone.

"It was like a scene from a war zone. There was garbage cans everywhere, broken bus shelters and mailboxes on the ground."

Cell phone video obtained by CNN partner CTV appears to show a tense standoff with a suspect after the incident. Police have not said whether the person in the video was Minassian.

The footage appears to show a man standing in front of a white van with a damaged front bumper. The man is yelling and extending one arm, pointing an object at an officer standing behind a black car.

The officer has his weapon drawn and pointed at the man. The officer slowly steps toward him and yells "Get down, get down!"

Later in the video, the man is seen on the ground and the officer is cuffing his hands behind him; the object can be seen lying on the ground off to the side.

As for whether the suspect had a weapon, "There's nothing that indicates he has a gun," Saunders said. 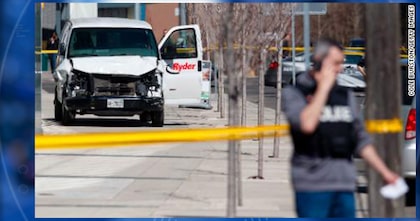 9 dead after van plows into pedestrians in Toronto