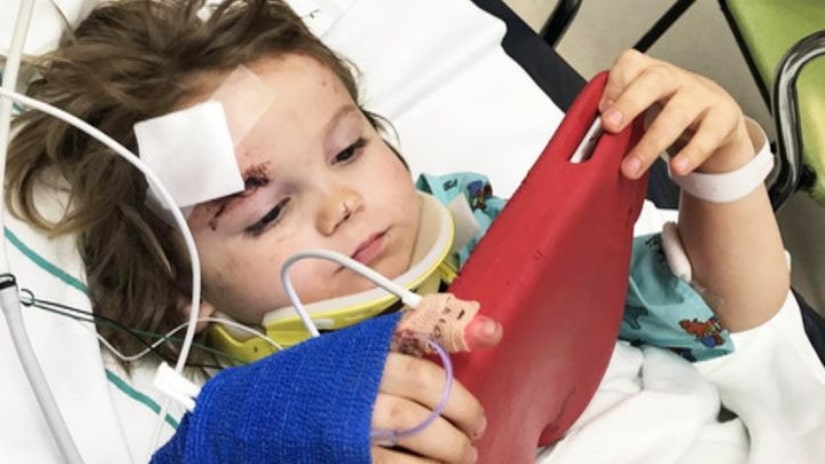 CHARLOTTE, N.C. -- (WSOC) -- A father is still recovering in the hospital days after he and his young son were run over by a teenager in the parking lot of a popular south Charlotte shopping center.

According to a police report, the teen stole a 24-pack of Bud Light from the Harris Teeter in the Blakeney Village shopping center on Rea Road Tuesday evening and ran out of the store.

The thief jumped into a waiting car, which sped away and collided with 41-year-old Nathan Green and his 4-year-old son, knocking them both to the ground.

Green suffered multiple skull fractures, and the boy had a deep gash on his head. Both were hospitalized at Carolinas Medical Center, where Green continues to recover.

She said her husband saw people trying to stop a teen in the parking lot. He thought the boy had lost his wallet, so he tried to get his attention.

When the kid jumped into a car instead, the father turned to go back inside.

"He was trained to do the right thing and kind of tapped his hand on his shoulder and said, 'Hey, they want you to stop,'" Amber Green said. "He continued to proceed into the grocery store to get the groceries and that is when the driver just plowed him."

The father tried to wrap himself around his boy to protect his head from the ground.

Even though the 4-year-old's forehead was cut deep, his mother said his questions cut even deeper.

"He will pause and get teary eyed and say, "Mom, I don't understand why someone wants to run me over. Mommy why I get hit by a car? Mommy why were they in a hurry? Where were they going?'"

Green is now questioning if her husband will recover from the hit-and-run.

"He has fractures all the way from the top all the way down to the base in multiple areas,” she said.

As the shaken family members try to heal, they hope neighbors will try to help.

“I actually hope that these kids mess up and tell somebody, brag what they did or talk about what they did and someone turns them in and does the right thing."