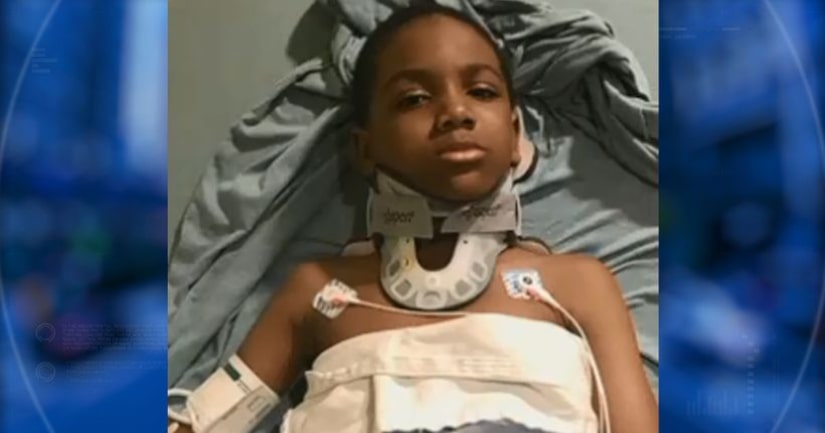 CINCINNATI -- (WXIX) -- A mother is fighting for answers after she claims her second-grade son was jumped by two fifth-graders at Mount Healthy Preparatory and Fitness Academy earlier this month.

These past few days Matthew Ascoff, 7, hasn't wanted to leave his mother's side. School used to be his favorite place to go, but now he fears going back.

"I scared to go back to school because I don't want to get hurt again," he said.

His mother, Jordan Dawson, said he was at Children's Hospital this past Tuesday after an attack in the school gym during dismissal.

She says her son was recently diagnosed with dyslexia and receives speech therapy. She says when Matthew told the boys he was going to get his older brother to get them to stop teasing him the boys started hitting him.

"They wouldn't let him pass and they ended up punching him in the face multiple times. Then once he was on the ground one child held his arms back while the other kicked him in the stomach," said Dawson.

She says it wasn't any ordinary scuffle.

"Those kicks are actually precision kicks because they take martial arts as part of their curriculum at school," she said.

Dawson says she decided to take her son to the hospital after he started coughing up blood. Doctor records show that Matthew suffered external injuries.

The School has been made aware of a complaint regarding a potential physical altercation on School grounds. The School takes complaints of violence very seriously and has begun an investigation into the matter accordance with established policies and procedures to determine whether additional action is necessary. Given that your request involves student information that is private under both state and federal law, we are unable to comment further at this time without the consent of parents of children involved. That said, the School has been and remains committed to providing children with a safe environment that promotes academic success and development.

He later sent a statement saying:

We have conducted an ongoing investigation since the event. All reports are of a verbal altercation without physical contact.

Dawson says she went to the principal immediately after the fight. She says she had the names of the students involved and was told that the school couldn't do anything because there were not any witnesses.