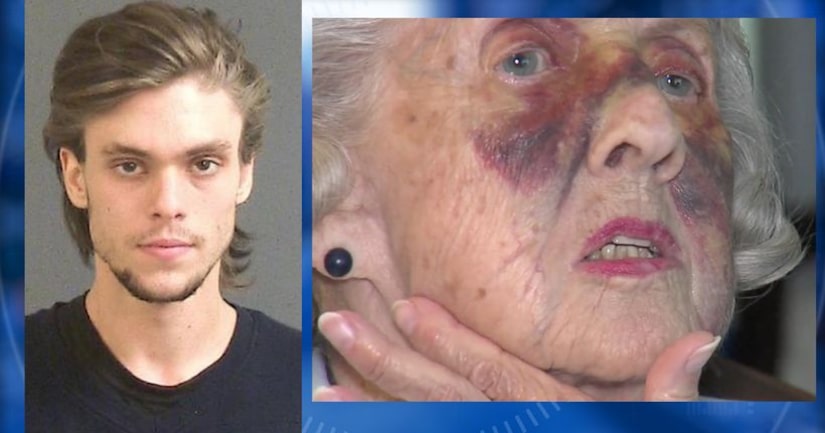 WEST ASHLEY, S.C. -- (KABB) -- Bond was set at more than $100,000 for 19-year-old Christian Jellico, who Charleston police say took advantage of his 89-year-old West Ashley neighbor by giving her a brownie laced with drugs and robbing her.

The charges are abuse of a vulnerable adult and larceny.

Margaret Sanders isn't afraid to show the aftermath of an apparent fall on her front porch last Saturday night.

It happened after she said she woke up disoriented after Jellico came over and offered her a baked good.

"This face isn't so bad, this side,” she said, pointing to bruising and swelling under her eyes and nose. "But this side goes all the way down more."

She talks about the incident that happened at her house in the Northbridge Terrace area of West Ashley.

Sanders said she was surprised because Jellico and another teen visited her occasionally, sometimes overstaying their welcome.

"Boys, I said, how about here's $20 each and you all can go to McDonalds and buy you something. And that's how I would get rid of them,” she laughed.

Investigators say Jellico returned to Sanders' home on Saturday with brownies baked from an unusual recipe.

"He had a big pan. And he said, 'I made these just now,'” Sanders recalls. “And they looked good. And they tasted delicious. They just were fierce I guess.”

Court documents show the brownies were laced with a chemical called Benzodiazepin. Police say within minutes, the 89-year-old unsuspecting neighbor passed out, then Jellico stole a TV and $500 in cash from her purse.

Police believe Sanders was asleep for about four hours before waking up. They say when Sanders woke up, she may have been disoriented and fell on the steps of her porch, causing the bruising. A friend arrived to help her and then called police.

"I don't blame myself, because, I hate to say this, but I like to do things for people,” she said.