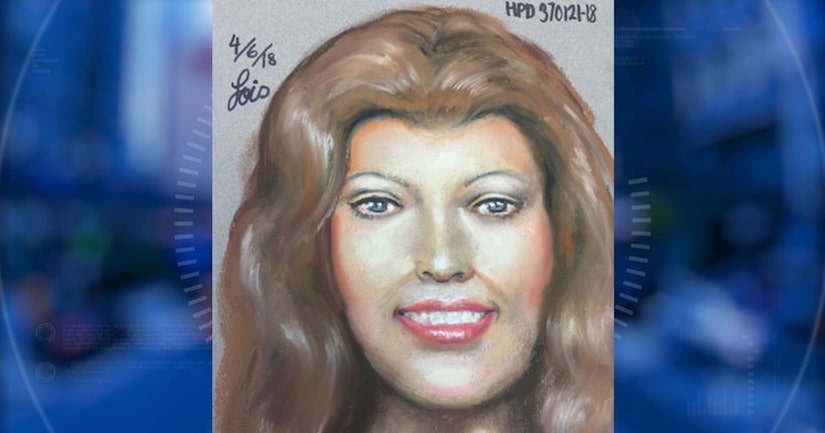 HOUSTON -- (KIAH) -- Houston police released a sketch Friday of the greatly decomposed human head found inside a garbage bag along FM 1960 over the weekend.

A group of roadside cleanup volunteers were picking up trash in the 10600 block of FM 1960 around 10:10 a.m. March 24 when they found a suspicious black bag along a bridge, police said. The group flagged down nearby officers who reportedly found what appeared to be human hair inside the bag.

The female victim was not immediately identified.

HPD homicide investigators responded to the scene and confirmed human remains in an advanced state of decomposition inside the bag, according to police.

Witnesses reported seeing a man tossing a black plastic bag off the bridge about two weeks before the woman's head was found, investigators said.

Detectives said the man was brought to the bridge in a bluish-green Chevrolet Silverado pickup truck with an extended cab. The back left passenger window was broken and had what appeared to be cardboard over the window. Investigators added that the truck had lots of rust and appeared to have been in several wrecks.

The suspect is described as a man in his mid-20s with short brown hair and long bangs covering his face. He is around 5 feet 4 inches to 5 feet 8 inches tall and was wearing a gray or black plaid shirt.