DEFIANCE COUNTY, Ohio -- (KRON/WANE) -- Court documents indicate a man and woman failed to provide emergency care to their baby as it struggled to breathe.

The Defiance County Sheriff's Department said the child was born inside the couple's Arrowsmith Road home on Oct. 29, 2016, but died 10 hours later.

It's not clear what led investigators to the home on March 28 when the baby's body was discovered.

The Starks are believed to be the baby's parents, according to court documents.

Court documents said Jared Stark moved the baby's decaying body from room to room before eventually placing it in a plastic storage container. Investigators said Stark then moved the container to a barn that was used to house farm equipment and animals.

The child has been identified as Ezra Stark, but Defiance County Coroner William Reeves said DNA results are pending because the body was badly decomposed. Reeves said those results should be available later this month.

Defiance County Sheriff Doug Engel said the Starks have another child living with them, but it's not clear who is currently caring for that child.

Defiance County Sheriff Doug Engel said investigators are looking into a religious connection between what happened and where the Starks attend church, the Gospel Light Tabernacle.

Engel said once his office completes its investigation it will be turned over to the prosecutor's office. Additional charges are expected. 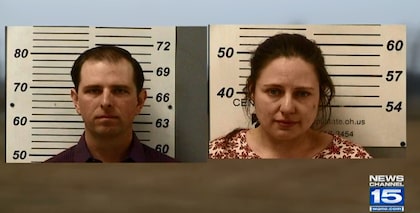