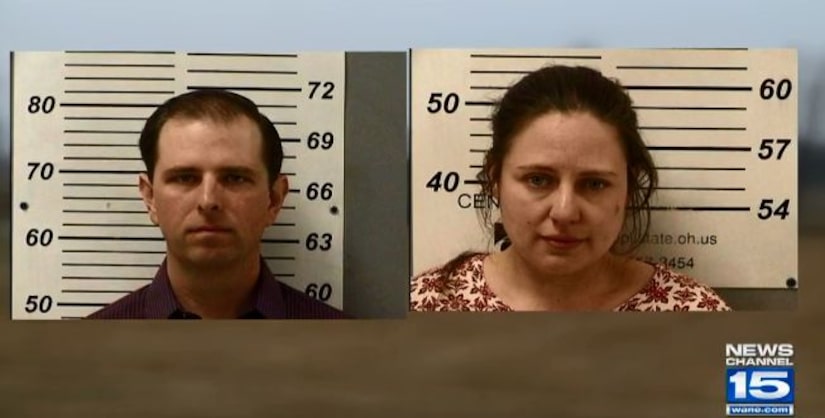 DEFIANCE COUNTY, Ohio -- (WANE) -- Police in Defiance County, Ohio have arrested a Hicksville couple on endangerment charges related to the 2016 death of a baby only hours old.

According to a news release from the Defiance County Sheriff's Office, a child was born Oct. 29, 2016, inside a home at 5414 Arrowsmith Road in Hicksville. The child reportedly died within the first 10 hours after it was born, police said.

On Wednesday, then, the Defiance County Sheriff's Office took the case, according to the news release.

During a search of the home and the land around it, authorities found the infant's body. Defiance County Sheriff Doug Engel would only tell NewsChannel 15 that the body was found inside the home.

According to court documents, Jared C. Stark, 33, and Sarah C. Stark, 35, are believed to be the parents of the deceased baby. The Starks reportedly failed to provide emergency care as the baby struggled to breathe, according to the affidavit.

The documents also indicate that Jared Stark moved the baby's decaying body from one room of the house to another before placing the corpse in a plastic storage container. Then, he put the container into a detached building that houses farm equipment and animals.

The baby has been identified by the coroner as Ezra Stark.

Police arrested the Starks on felony counts of Endangering Children. Jared Stark was also jailed on a charge of felony Abuse of a Corpse.

Sheriff Engel confirmed that the Starks do have another child who lived with them. It is unclear who is caring for that child now.

Engel said detectives were looking into a religious connection between the Starks and the discovery of the body in the home. He said an investigation into the Gospel Light Tabernacle, where the Starks reportedly attended regular services, has begun.

Both Starks are being held at the Corrections Center of Northwest Ohio and appeared in Defiance Municipal Court Friday March 30th, police said.