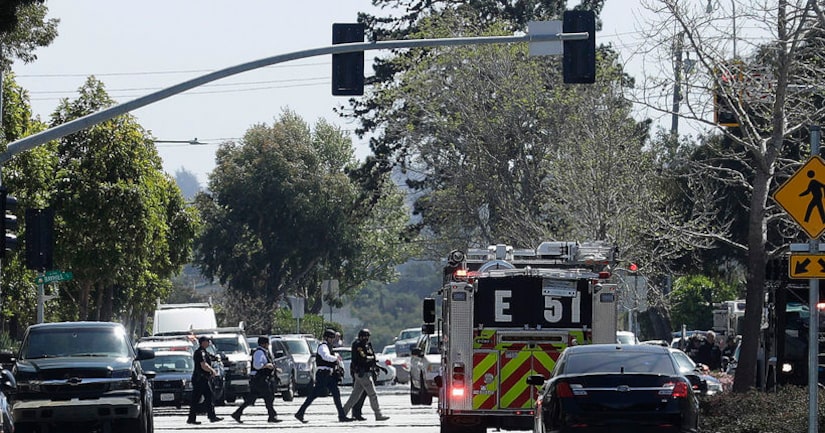 Sources tell KRON4 that a woman shot and killed her boyfriend.

Police say the shooter is dead from a self-inflicted gunshot wound.

There are at least four victims being treated at hospitals in the Bay Area.

A witness told KRON4's Gabe Slate that they heard 20 shots fired. He also heard that a woman was shot and crawled into the Carl's Jr. next to YouTube.

Stanford Hospital says it has received four to five patients from the shooting.

One of the women is 32 years old and is seriously injured, according to police.

The other woman is 27 years old and is in fair condition.

The man is 36 years old and is in critical condition.

A YouTube employee tells CNN she saw one person shot on the patio where they eat.

2:40 p.m. PT: San Bruno Police Chief Ed Barberini told reporters at a news conference that the suspected shooter, a female, was dead from a self-inflicted gunshot. Barberini said four other people were hospitalized after being shot at the scene.

The building was evacuated and police were clearing it following the shooting. Multiple agencies were on scene, and the investigation was ongoing, Barberini said.

2:25 p.m. PT: Sources tell KRON4 that a woman shot her boyfriend. We're also hearing reports that the shooter is "down" but police have not yet confirmed that.

The City Manager tells KRON4 they've received multiple 911 calls from YouTube, but they did not disclose the reasons why.

The headquarters is located at 901 Cherry Avenue.

San Bruno Police tweeted at 1 p.m. to avoid the area due to police activity.

Employees could be seen walking out of the building with their hands up.

A YouTube employee tells CNN she saw one person shot on the patio where they eat.

Several employees sent tweets saying there is a shooting and that there are victims.

KGO-TV reports the San Mateo County Sheriff's confirmed that an active shooter situation is taking place place on the campus.

Another law enforcement source confirmed to ABC7 News reporter Dan Noyes that the shooter is a white, adult female wearing a dark top and head scarf.

The source told ABC7 News that there are reports several people have been injured, but there are no reports of fatalities.