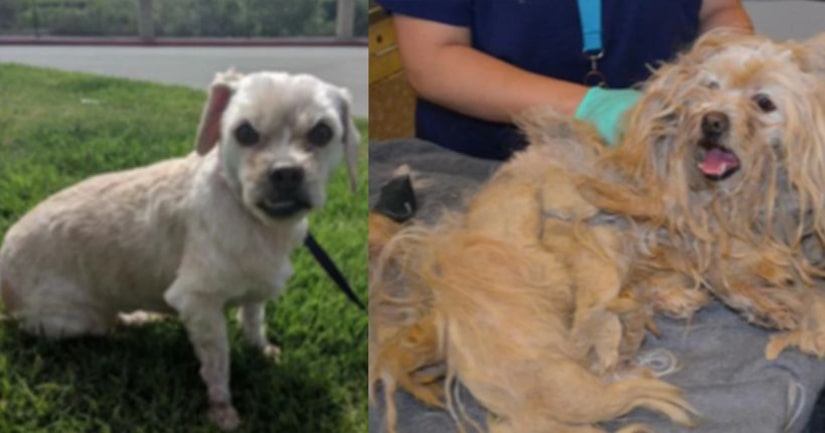 The Riverside County Department of Animal Services was initially contacted by the dog's owner, who called the agency on Monday afternoon to have them retrieve his “dead” 8-year-old Lhasa Apso. But when officers arrived they discovered the dog wasn't deceased — she was alive, hiding under a bush against the house, but suffering from severe neglect, according to a news release from Animal Services.

The owner later explained to Animal Control Officers Joh Hergenreder that his pet didn't want to eat and was “acting funny,” the release stated. When pressed about the last time she was groomed, the owner responded, “about a year.”

Hergenreder brought the canine to Western Riverside County/City Animal Shelter where she was immediately examined, given pain medication and treated by veterinarians.

As part of the examination, they cut away the dog's matted coat — which took about an hour due to some parts being several inches thick — and discovered she had maggots in her rear end.

“This is where the dog's skin was moist and enflamed – and the infection of her skin provided an environment in which maggots thrive,” staff veterinary Dr. Sara Strongin said in the release. “The skin infection affected the entire hind end of the dog.”

On Wednesday morning, veterinary technicians sedated the dog so they could attend to the dog's legs and paws, the most difficult part of grooming the matted coat.

“This is where the coat was so tightly adhered to the skin,” Strongin explained. “It took them almost an hour to finish that task because the matted coat covered all surfaces along the entire length of all four legs, including the paws.”

They eventually fully shaved the dog and treated her skin irritations. An injection helped ease her pain and discomfort, according to officials.

“This dog suffered in this condition and it's just terrible to allow a breed of this type to go this long without properly grooming,” said Sgt. Dylan Gates said.

As part of proper pet ownership, dogs should be professionally groomed every six to eight weeks, the release noted.

“Grooming a Lhasa Apso is not just for looks. It is imperative to get the grooming done regularly to ensure the dog's health, too,” Gates added.

Authorities are investigating the incident as a case of animal cruelty and will likely submit it to the Riverside County District Attorney, authorities said.