AUSTIN, Texas -- (KXAN) -- What was believed to have been an explosion at a south Austin Goodwill that had authorities swarming the area on Brodie Lane at Slaughter Lane turned out to be unrelated to the serial bombings around Austin.

The Austin Fire Department says the call for a possible package explosion came in at 7 p.m. at the Goodwill located at 9801 Brodie Ln., which is just north of Slaughter Lane.

Austin-Travis County EMS says a man in his 30s was taken to the hospital with serious injuries.

In a tweet at 8:05 p.m., The Austin Police Department said the items inside the package was not a bomb but rather "an incendiary device" and that it wasn't a "package explosion."

During a news conference at 9:40 p.m., APD Assistant Chief Ely Reyes made it very clear this incident was in no way connected to the series of bombings that the city has seen.

"We have no reason to believe that this has any relation to the other incidents that have occurred," says Reyes.

Crews have set up a perimeter around the area.

A spokesperson for Goodwill of Central Texas says an employee was injured but has non life-threatening injuries. St. David's South Austin Medical Center says the person was treated and released as of 9 p.m. The store is regularly open until 9 p.m. Goodwill says all of its stores in Austin will be closed in an abundance of caution.

The location of the possible explosion is approximately 3.5 miles due south on Brodie Lane from the FedEx shipping store that authorities say the serial bomber used to ship two recent packages from. If this is connected to the serial bomber, this will be the sixth bombing since March 2. Early Tuesday morning, a package moving through the FedEx ground sorting center in Schertz exploded. 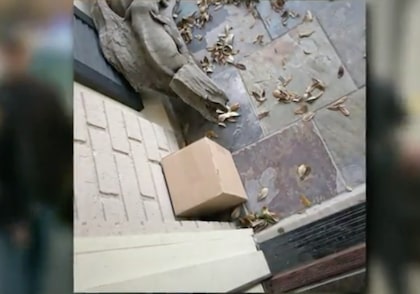