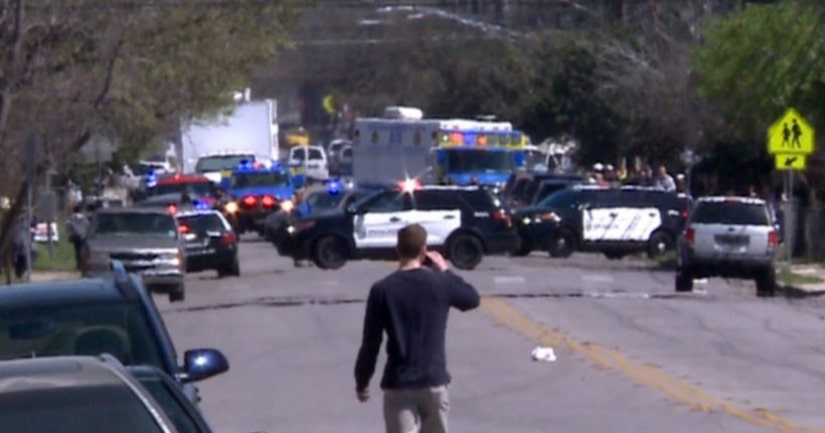 AUSTIN -- (KXAN) -- The latest of four bombings in the Austin area in the past 16 days has a "higher level of sophistication" than the previous three, according to an update from Austin Interim Police Chief Brian Manley.

"We are clearly dealing with what we expect to be a serial bomber at this point," Manley said.

Hours after the bombing Manley said it is "very possible" the device in Sunday night's explosion was triggered by a trip wire. In a press conference around 10 a.m., he said the device that exploded has similarities to the other explosive devices, based on preliminary results, even though it does use a more complex tripwire system. He noted in an earlier press conference that the bombs have different kinds of projectiles within them.

Two men, who are 22 and 23 years old respectively, were either riding or pushing their bicycles, when the latest bomb next to a fence exploded in the "Travis Country East" subdivision in southwest Austin around 8:32 p.m. Both men are in good condition at the hospital, according to a spokesperson for St. David's South Austin Medical Center, but do have significant injuries. The Austin Police Department confirmed both men injured in the latest bombing are white, while the other victims were black or Hispanic.

"We are clearly dealing with what we expect to be a serial bomber at this point."

Because of the concern about the latest bomb possibly having a tripwire device -- in which a victim puts pressure on a wire or fishing line to detonate it -- officials waited until it was daylight to sweep the area and begin a thorough search and analysis of the blast. Along with more than 500 federal agents, bomb technicians from San Antonio and Houston are headed to Austin to help with the case.

Chief Manley said in a press conference at 1:45 a.m. Monday that the possibility the bomb was triggered by a trip wire and the fact that the explosive device was left next to the road instead of on a front porch like the previous three cases necessitated a new warning to the public:

"We now need the community to have an extra level of vigilance and pay attention to any suspicious device, whether it be a package, a bag, a backpack, anything that looks out of place. And do not approach it. Again do not approach items like that, but instead call 911 to report it so we can go out and make sure it's safe."

Initial reports indicate some key differences between the latest bombing and the other three, including that it happened at night, did not occur in east Austin, did not appear to be on someone's front porch, may have been set off by a trip wire and may not be a package. Police are asking anyone who sees anything suspicious -- not just a package -- to call 911.

Police are also looking for any surveillance video from the area of the latest bombing. They ask Travis Country residence to call 512-974-5210 if they have any video of the blast, or suspicious people or vehicles in the area.

"This has to be a community response," Manley said Monday morning. "This is something we have to solve as a community."

The four bombingsSunday night's bombing took place just after 8:30 p.m. Austin-Travis County EMS says it originally responded to the 4700 block of Eagle Feather Dr., located off of Southwest Parkway and west of South MoPac Expressway. However, when they arrived, ATCEMS and Austin police said the explosion was actually in the 4800 block of Dawn Song Drive, which is one block away.

The explosion Sunday evening is the fourth such incident since March 2, when 39-year-old Anthony Stephan House was killed by a package bomb in northeast Austin. A second (east Austin) and third bombing (southeast Austin) during the morning hours of March 12 ended in another person being killed and another two injured.

"Three targeted attacks and now a random victim, we definitely see a change in the method the suspect is using," Manley said. He added that at this point officials are not willing to classify these bombings as domestic terrorism or hate crimes because they don't know enough, and don't want to cut themselves off from considering all possibilities just yet.

Sunday night's bombing came less than 12 hours after the Austin Police Department held a news conference pleading for the person responsible for the recent bombings to come forward before anyone else was injured or killed.

"We want to understand what brought you to this point and we want to listen to you," said Chief Manley.

During the news conference, authorities also increased the reward amount to $115,000 for any information leading to the arrest of the suspect or suspects.