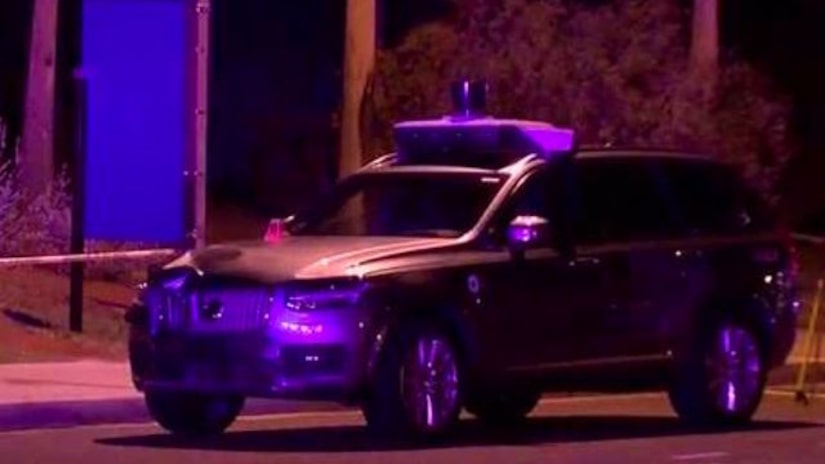 The crash occurred near Mill Avenue and Curry Road around 10 p.m. Sunday night.

The Uber vehicle was reportedly headed northbound when a woman walking outside of the crosswalk was struck.

The woman, identified as 49-year-old Elaine Herzberg, was taken to the hospital where she died from her injuries.

Tempe Police says the vehicle was in autonomous mode at the time of the crash and a vehicle operator was also behind the wheel. No passengers were in the vehicle at the time.

An Uber spokesperson told ABC15 they are aware of the incident and are cooperating with authorities.

They released the following statement: "Our hearts go out to the victim's family. We are fully cooperating with local authorities in their investigation of this incident."

Uber has paused self-driving operations in Phoenix, Pittsburgh, San Francisco and Toronto, which is a standard move, the company says.

The police investigation is still active, and the National Transportation Safety Board also tweeted Monday that they will be sending investigators to Tempe.

Uber began testing self-driving cars in Tempe in February 2017. The fleet of self-driving Volvos arrived in Arizona after they were banned from California roads over safety concerns. Gov. Doug Ducey touted Arizona as a testing ground, saying at the time in a written statement, “Arizona welcomes Uber self-driving cars with open arms and wide open roads.”

One of the self-driving cars was involved in a crash a month later, after a car failed to yield to the Uber vehicle and hit it, authorities said. The self-driving SUV rolled onto its side as a result crash.

There were no serious injuries were reported in that crash.