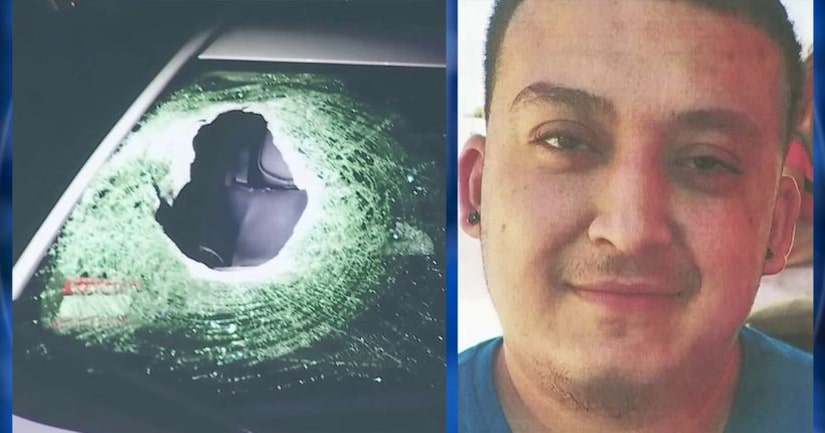 LOS ANGELES -- (KTLA) -- A 23-year-old man who had just learned his wife was pregnant died after a boulder "intentionally" thrown from a 134 Freeway overpass slammed into his family's car as they were driving through Pasadena, authorities said Thursday as they sought help finding the perpetrator.

The incident occurred shortly before 9 p.m. Tuesday, as the family was in their 2017 Toyota Corolla headed westbound on the 134 under the Orange Grove Boulevard overpass, according to the California Highway Patrol.

The victim's 21-year-old wife was behind the wheel when a 30- to 35-pound boulder suddenly crashed into the car's windshield and shattered the glass. It hit the driver's husband, who was sitting beside her in the front passenger seat, CHP said.

The young woman's mother and a 4-year-old daughter were also in the vehicle at the time, but apparently escaped unharmed.

The woman immediately drove to the nearest hospital, Glendale Adventist Medical Center, to get medical help for the wounded man. Emergency room personnel did what they could to save him, but the victim succumbed to his injuries at the hospital.

Investigators believe the massive rock that killed Lopez was purposely hurled onto the roadway, CHP officials said at a Thursday afternoon news conference held in front of the CHP's Altadena Station.

“This was an intentional act," CHP Lt. Chuck Geletko said. “Any prudent person would know that a boulder that size would seriously harm someone driving on the freeway below.”

At the news conference, authorities and the victim's family members made impassioned pleas to the public for help tracking down whoever was responsible.

Guadalupe Gutierrez, the victim's wife, recounted through sobs how she and her husband had recently found out that she was pregnant.

CHP investigators said they have gathered evidence, including checking the boulder for any possible DNA evidence, but are looking for witnesses to come forward.

“This was an innocent family, driving home," Geletko said. "We need help from the public to find the person who committed this atrocious act and prevent this from happening to another family."

An earlier CHP write-up of the incident indicated an unknown person was wanted for 187 PC, a reference to the California Penal Code section for murder.

Anyone who witnessed suspicious behavior in the vicinity of Orange Grove and the 134 around the time the boulder was tossed off the overpass is urged to call CHP's Altadena Station at 626-296-8100 or 323-259-3200 afterhours.