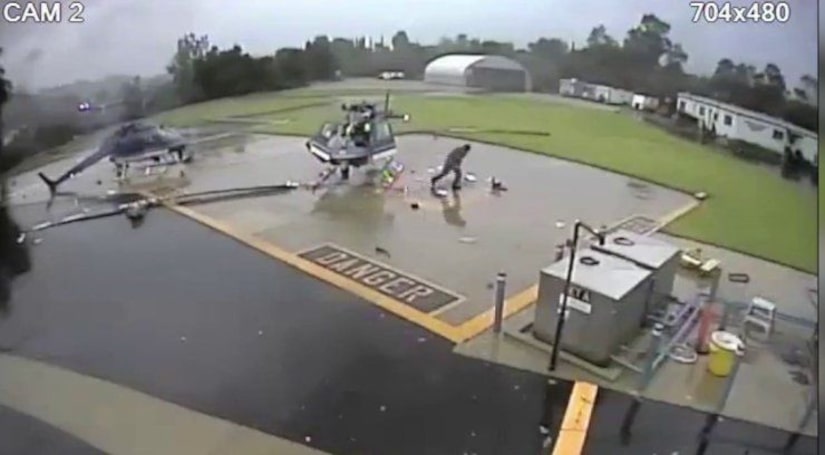 PASADENA, Calif. -- (KTLA) -- Footage provided by authorities Monday captured a 2012 incident in which two Pasadena police helicopters collided at a heliport, knocking an air support officer on the ground.

That officer, two pilots and three other people sustained minor injuries from the crash on Nov. 17, 2012 at the Pasadena Police Benedict Heliport in Altadena, according to the National Transportation Safety Board's final accident report.

One of the aircrafts had departed the heliport at 3:52 p.m. to provide traffic support for a college football game at the Rose Bowl, the agency said, but the weather forced the helicopter to return to ground 6 minutes later.

It was raining around the area at the time of the incident, according to the NTSB's report.

The pilot told investigators that she followed protocol and broadcasted her position while heading back to the heliport. She said she saw the outline of another helicopter on landing pad one and radioed her plan to touch down on landing pad two, but she said she received no response.

The second helicopter's pilot had moved out of the hangar at 3:55 p.m. to respond to a call for assistance, according to the NTSB. He reported parking the aircraft just outside of landing pad one due to drainage issues. He stated that he was not on the radios because he would be airborne in a couple of minutes, the agency said.

An air support lieutenant, unidentified in the NTSB's account, reported walking from his office toward the parked aircraft to tell the crew to stand down due to the weather. The officer said he was standing outside the helicopter's left door when he saw the other aircraft coming and "thought that was a good thing," the NTSB's report said.

"He recalled hearing a loud bang, getting knocked to the ground, and then running away [from the parked helicopter]," the agency said.

The tactical flight officer aboard the parked helicopter reported hearing a sudden loud noise and seeing the lieutenant running toward a fire extinguisher. He said when he looked up, the helicopter's main rotor was gone.

The NTSB said the second helicopter's pilot had already started the engine when the first one came back, leading to the collision of the two aircrafts' rotor blades.

Moisture on the landing pilot's windscreen also obscured her visibility, NTSB said. That pilot, along with two of her passengers, sustained minor injuries. The other pilot and the tactical flight officer on board also suffered minor injuries. Authorities said all five, in addition to the officer on the ground, were taken to Huntington Memorial Hospital.