I've met a lot of NYPD officers who are part of legacy on the force. Their grandfathers, fathers, mothers, uncles, you name it -- all wore the badge.

I got a chance to talk to a very special detective who's also following in his father's footsteps, even though his old man never busted a bad guy.

As a cop with the New York City Police Department, day in and day out, Detective Matthew Klein nabs the bad guys.

"That is the most rewarding thing, nailing that guy," said Det. Klein.

But unlike other police officers, he's not armed with a gun. His weapon is something very different: It's a pencil and paper.

"I try to envision what the guy looks like," said Det. Klein.

The reality is that if you get it wrong, either the bad guy gets away or the wrong guy gets cuffed.

"I do everything in my power to get it as right and the best I can," said Klein.

The 11-year veteran of the force is a forensic artist for the New York Police Department.

As a young boy, Matthew Klein got the drawing bug from his dad, who worked as an animator for Walt Disney and Warner Brothers.

How did you learn to draw?

"My dad drew for work," said Det. Klein. "He supplied me with the paper and the pencils and I just got into it and just loved doing it."

For Klein, drawing was a passion, but not a career path. Then, after graduating from high school, 9/11 hit, and that changed everything.

You went to Iraq.

"Yes I did. It was right after September 11th, and I just wanted to serve my country," said Det. Klein. "And I signed up with the U.S. Army's 3rd Infantry Division."

In Iraq, Klein worked as a squad marksman, and he was awarded a Purple Heart.

"We were doing a mission, checking through a cemetery looking for weapon caches," said Det. Klein. "And next thing you know, the earth flies up, engulfed in a giant I.E.D., I went flying in the air about four feet."

Matthew Klein suffered a punctured eardrum and shrapnel to the face from the explosion. He was honorably discharged and went back home to New York City.

"I came back here, became a police officer to help people fight against crime, and take care of the people that can't help themselves, and do the right thing," said Det. Klein.

His first assignment with the NYPD was patrolling Queens. But even working the streets, Det. Klein never stopped drawing.

How did you find out that the art unit needed somebody?

"I didn't even know it existed until about 2011, and I made a phone call, they are like 'OK, come in, bring your portfolio,'" said Det. Klein. "So I came in. I met with the senior artist, Detective Juan Perez, and I took the drawing test, sweating profusely. He's like 'You did very good, definitely on the list, you just have to wait for me to retire, kid,' and I was like 'OK.' So that was 2011."

Three years later, Det. Perez retired and Det. Klein stepped up to the palette. There are three police sketch artists in the unit, out of 38,000 sworn officers.

"It's an honor to be in this unit. It definitely is," said Det. Klein.

But for forensic sketch artists, the biggest challenge is drawing a picture of a person you've never seen, an image that could be plastered on hundreds of wanted posters all over the city.

What is the key when you sit down with somebody to get them to give you an accurate description of the suspect?

"You got the interview, you have to relax them, I don't talk about the crime," said Det. Klein. "These are traumatic things, you know, and the one thing I try to do is empower the victim."

With surveillance cameras trained on every street corner, virtually every waking moment of life is captured on video. But what happens when technology breaks down?

"When all else fails, it's the one-on-one human connection," said Det. Klein. "When everything else is exhausted, technology doesn't work and everything like that, you have something to fall back onto."

Det. Klein produces hundreds of sketches a year, but the one that sticks out most is the case of the Brooklyn Slasher.

What was your first, most critical sketch?

"In early March of 2016, there was an elderly woman walking, minding her business, and an emotionally disturbed person slashed her in the neck and took off running," said Det. Klein. "Very fortunately there was a witness down the street. He saw the guy and remembered him to the tee."

It looks like you made that sketch from that picture, and it was the opposite.

"I did the drawing, but the witness is the reason why that drawing looks like that, he was able to give me that information," said Det. Klein.

Cops caught the Brooklyn Slasher and put him away, a triumph for the detective armed with only pencil and paper.

What's the most rewarding part of your job?

"When they catch the bad guy. Seeing it on the news, it's a great feeling," said Det. Matthew Klein. 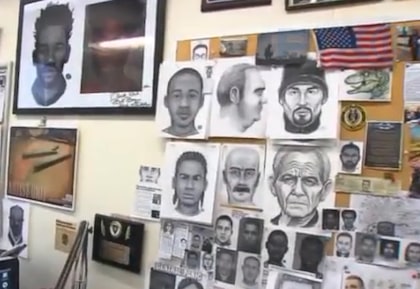 Inside the NYPD sketch artist unit 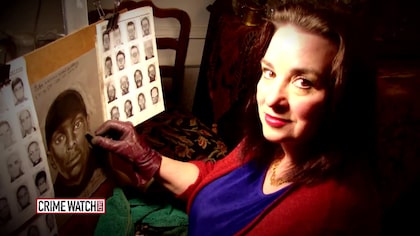