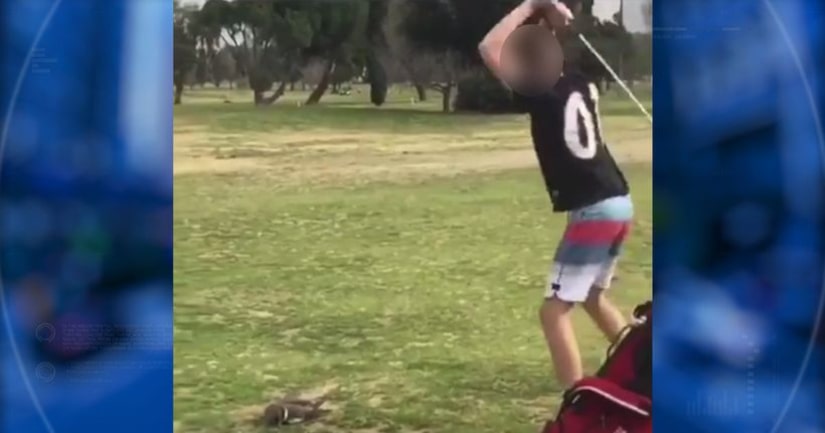 ONTARIO, Calif. -- (KTLA) -- A 16-year-old boy suspected of fatally battering a duck with a golf club in Ontario during a caught-on-video incident that was shared on social media was taken into custody and cited, police said Thursday.

An animal cruelty investigation began Wednesday night after authorities were tipped off about a duck being abused by a young man at the Whispering Lakes Golf Course, located at 2525 E. Riverside Drive, according to an Ontario Police Department news release.

Video depicting the waterfowl being hit by the club was posted on social media, according to the release. The duck's remains were later found.

Through the investigation, police identified a 16-year-old boy as a suspect in the case. He was located at his home and taken into custody without incident.

The teen was issued a citation for felony animal abuse and released to his parents, police said. Authorities have not identified him because of his age.

A statement from the Chaffey Join Union High School District emailed to KTLA early Thursday afternoon, however, confirmed he was a student at Colony High School in Ontario and is a member of the school's golf team. The team was playing a practice round at their home course when the incident occurred, according to Superintendent Mathew Holton.

“One of the students inadvertently hit a duck with his tee shot. When the students came across the injured duck, one of them is said to have wanted to put the duck down to prevent further suffering. He then took a club and hit the duck two times. Four other students reportedly witnessed this, and approximately 45 seconds of video of the incident has appeared on social media,” Holton wrote.

The statement continued: “The student was arrested on charges for animal cruelty, and is not at school today. Colony High School does not condone animal cruelty in any way, and is fully cooperating with Ontario police with regard to this incident.”