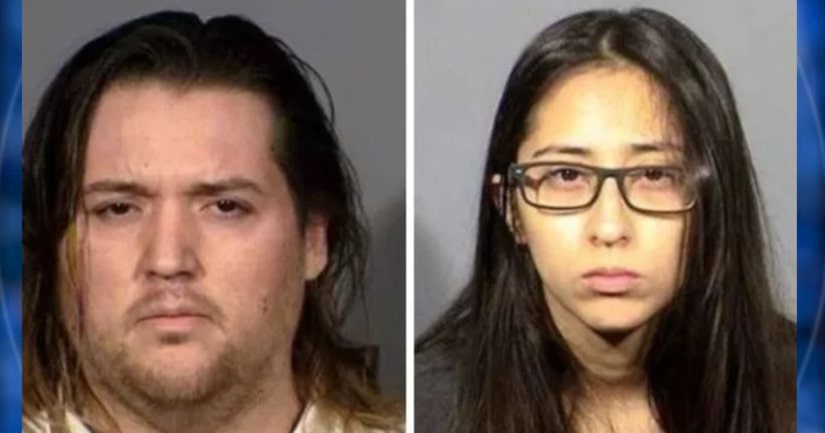 LAS VEGAS -- (KRON) -- A 5-month-old baby whose parents were arrested for his death only weighed 5 pounds when he died, according to an arrest report released Monday.

The medical examiner who performed an autopsy on the baby on Feb. 27 told police there wasn't any sign of trauma, but there was a cause for concern giving how light the baby's weight was.

To put things into perspective, when the baby was born he weighed 6 pounds 2 ounces. According to medical personnel, a 5-month-old baby should be between 18-20 pounds.

The coroner also said the baby had white gums, which is an indication of dehydration.

On Feb. 25, the baby's mother, Loreana Martinez called Metro Police's 2-1-1 number to report that her baby wasn't breathing. The baby was rushed to Sunrise Hospital where he died.

During the transport, medical personnel told dispatchers that the baby appeared to be malnourished and emaciated because his bones and rib cage could easily be seen and his spinal cord appeared as if it was about to poke out of his skin.

The report states that back in December 2017, the child's doctor told the mother that her baby appeared to be failing to thrive because he didn't weight enough for his age. At that time, the child was around 9 pounds.

The doctor told Martinez to bring the baby in for a follow-up examination in two weeks, but she never showed. In fact, the report says Martinez missed her appointments on Jan. 1, Jan. 29, and Feb. 13.

After the baby died, an officer arrested the 24-year-old mother and the child's father, 29-year-old Anthony Oceja in connection with the baby's death.

Martinez told police that she tried to give the baby pureed bananas and pureed squash but the baby got constipated, so she went back to her breast milk.

She also told officers that over the last 48 hours of the child's life, the baby would “shout out” when she burped him and that his stool was black. She told detectives she fed him multiples times a day for 45-60 minutes each time.

When Metro Police went to Martinez and Oceja's home to investigate officers found four dogs: Three of the dogs, pit bulls, were all malnourished, the report said.

The report said, based on the pictures around the house, Martinez's other children appeared to be malnourished when they were younger.

The report said Martinez and Oceja told authorities the baby was in the bedroom and they were in the other room eating when he stopped breathing.

Oceja and Martinez were transported to the Clark County Detention Center where both face charges of:

The two living siblings were taken into protective custody and are currently being evaluated by medical personnel for potential health concerns.

The malnourished dogs were turned over to Clark County Animal Control. A follow-up investigation is being conducted by detectives with the LVMPD Animal Cruelty Unit.

FULL STORY: Report: Malnourished 5-month-old was only 5 pounds when he died - KRON