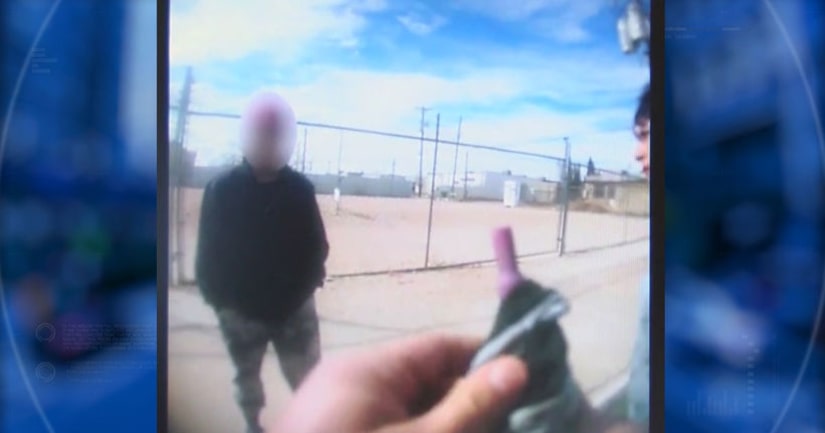 HOBBS, N.M. -- (KRQE) -- A mother with her child in the car was pulled over for a brake light that wasn't working. When the officer got to the vehicle he smelled drugs and the stop took a bizarre turn.

It was Feb. 18 when Hobbs Police conducted the traffic stop.

“The reason I stopped you is because your left brake light is out. Are you aware of that?” the officer asked the driver, Elizabeth Arenivaz.

The 41-year-old was taking her son and nephew home. When officers asked for her license, she said it was suspended or revoked. Officers asked her to step out of the car.

“OK, so you're going to get a citation for your suspended driver's license,” the officer told her.

He then smelled drugs and called in the K-9 unit to search the vehicle. The K-9 unit alerted police to the driver door. When they asked Arenivaz if anything was in there she said, “No.”

Officers asked to search the car. When the boys stepped out of the car, the officers immediately noticed something strange.

The officer asked one of the boys, “What do you got in your pants? In your pant leg, what's in there?”

Bending over to pull the object out, the 12-year-old struggled and said he could not get it out. Officers told Arenivaz to get the object out for him.

“Listen, Elizabeth. I'm not going to mess with you, get that out of his pants right now. You're his mother,” the officer said.

A meth pipe was located in his pants. When the officer asked why it was there, the 12-year-old said, “I don't know. I just found it in my pants, sir.”

When officers asked Arenivaz why her son had a meth pipe in his pants she said, “I did not know, I just picked him up from his cousin's house.”

Police say Arenivaz finally admitted it was her pipe and that she gave it to her son to hide. Police also found more than a gram of meth.

Arenivaz has a hearing later this month on charges of possession and contributing to the delinquency of a minor.