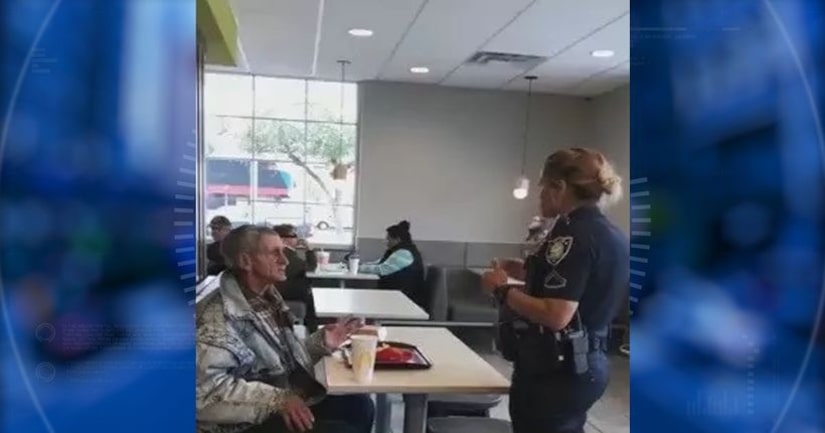 Police also escorted the customer filming the incident, Yossi Gallo, from the restaurant. Gallo can be heard telling the officer that he met the man outside the restaurant and invited him in, according to television station WMBF in Myrtle Beach.

“I waved him down, and I said, 'Hey, are you hungry?' and he said, 'Yes.' So I went in there with him, and as soon as we went inside, the lady at the register says, 'You're not getting food.' She tells him he's not getting food,” Gallo told the station.

The officer was responding to a call made by a McDonald's employee requesting a trespass warning for a panhandler in the restaurant parking lot, according to the Myrtle Beach Police Department.

In the video, Gallo can be heard saying loudly, “You guys suck. I'll never be back here,” as the officer tells the man he has to leave, his food only partially eaten.

“Calm your voice,” the manager says to Gallo. “That's what I'm asking you to do.”

Gallo replies, “This is how I talk, I talk loud. If the officer has a problem with that, the officer's going to arrest me.”

The manager then tells Gallo, “Sir, you're being disorderly.”

Both Gallo and the other man eventually complied with the officer's order and left the McDonald's.

As of Friday morning, the video had been viewed over 62 million times and thousands had commented, many furious about that the officer's handling of the situation.

Myrtle Beach Mayor Brenda Bethune praised the officer, however, saying in a video posted to the city's Facebook page that, “what you will not see on that video is the whole story.”

“(The officer) handled herself in the most professional manner and treated this gentleman with dignity and respect,” Bethune told WMBF, adding that the man was known to the restaurant's employees and had caused problems in the past.

“I believe in our Police Department,” Bethune said. “I know how close they work with our homeless community as well as the four shelters located within our city limits.”

Gallo, for his part, said he didn't have an issue with the officer.