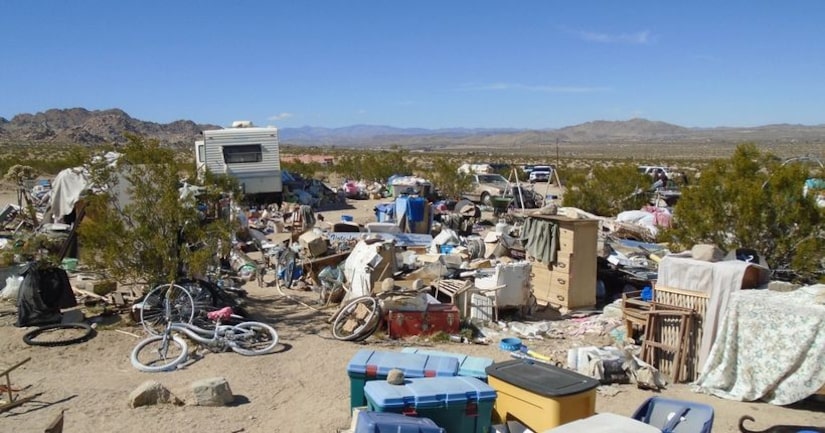 LOS ANGELES -- (KTLA) -- Two parents were arrested after their three children were discovered living in a box among feces and trash outside a trailer just east of Joshua Tree, deputies said Thursday.

Officials made the discovery after happening upon a travel trailer that looked abandoned in the 7000 block of Sunfair Road while on patrol around 11 a.m. Wednesday morning.

An initial survey of the property revealed there was no electricity or running water, and large holes, mounds of trash and human feces were scattered throughout the area, deputies said.

Photos of the property released by sheriff's officials show unkempt living conditions, with debris, storage boxes and indoor furniture littered among children's toys and bikes. The makeshift structure the victims allegedly lived in appeared to be constructed of several pieces of weather-damaged plywood, stacked together and covered with tarps as roofing.

There were also 30 to 40 cats found living inside the trailer, the Sheriff's Department said.

The children were not being properly fed and clearly living in extreme squalor, officials determined. All three were placed into the custody of San Bernardino County Children and Family Services.

Their parents — Mona Kirk, 51, and Daniel Panico, 73 — were arrested on suspicion of willful cruelty to a child.

They were being held in lieu of $100,000 bail and expected to appear in court Friday, inmate records show.