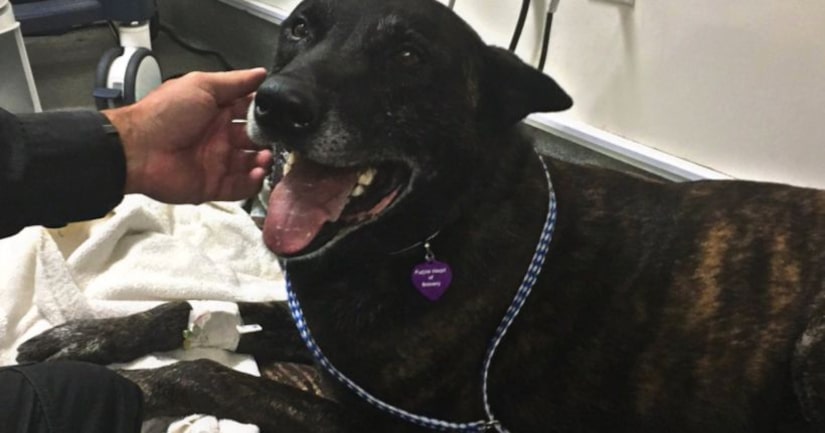 SANTA ANA, Calif. -- (KTLA) -- A K-9 with the Santa Ana Police Department was released from the hospital Tuesday night following surgery on his jaw after losing six teeth — an injury sustained after he managed to take down a suspect involved in lengthy, chaotic pursuit the day before.

The dog, a Dutch Shepherd named Puskas, appeared "loopy" coming out of surgery at VCA Yorba Regional Animal Hospital in Anaheim but was recovering well, according to his handler, Officer Luis Galeana. The police pooch was discharged from the facility hours later.

“He's going to get a lot of pampering, a lot of rubs on his back and his belly,” Galeana said.

Galeana was with Puskas the day before, when the dog ran after a man wanted on suspicion of assaulting an officer following a pursuit in which the man allegedly carjacked someone while authorities were on the chase, officials said.

Puskas managed to outrun and pin down Antonio Padilla Jr., 37, who is accused of attempting to hit a female officer with his truck during a traffic stop, triggering the police chase, authorities said.

"He was running at full speed. He can probably pick up 25 to 30 mph at full speed," Galeana said of the police dog.

"And when he launched at the suspect, that momentum pushed them, dropped them both back," he said of the dog and Padilla. "And [Puskas] was near the curb when he fell back. I think that's when he hit the … curb and injured himself."

That impact is believed to be the cause of multiple mouth injuries.

"He came in with fractured teeth down to the gum line and a laceration in the gum," said Dr. Steve Dunbar of Yorba Regional Animal Hospital.

But the veterinarian said the six upper front teeth lost by Puskas shouldn't be enough to stop him from eating, biting or working as other back teeth can serve those purposes sufficiently.

"We'll have to wait and see how he responds to treatment and recovery, but he seems to be doing fairly well at this point," Dunbar said.

For now, the dog is still recuperating, Galeana said, describing the first moments he met up with Puskas following surgery.

"It was a very good feeling. My dog was super happy when he saw me," he said. "He's still kinda loopy, but he was able to get up on his four legs and kinda lick my face a little bit."

The dog, a five-year veteran of the force, has already been awarded a Purple Heart for bravery for his efforts on Monday.