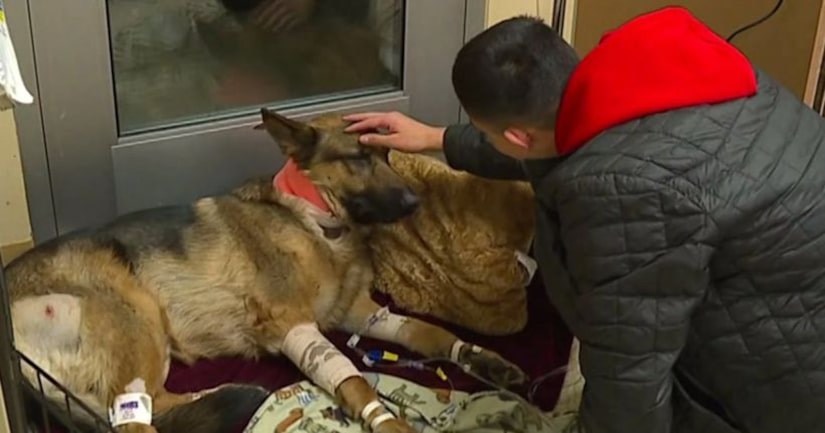 DES MOINES, Wash. -- (KTLA) -- A German shepherd was brutally beaten and shot multiple times while trying to protect his teenage owner, who was home alone when two thieves broke into the family's residence on Wednesday.

The home-invasion occurred about 12:20 p.m. in the 1400 block of South 234th Street, according to Des Moines Police Department Cmdr. Doug Jenkins.

"A 16-year-old boy who was home alone said he believed someone was breaking in," Jenkins told KTLA sister station KCPQ in Seattle. "He heard noises and voices, ran upstairs and hid in closet. He continued relaying everything he heard on the phone with dispatch."

The teen was hiding in a closet with his dog, Rex, when the 2-year-old German shepherd ran downstairs to confront the intruders, according to Seattle television station KIRO. The thieves beat the dog, leaving him badly injured.

Even after being bloodied and hurt, Rex still had enough strength left to get back to the teen -- his best friend -- and protect him as the thieves proceeded into the bedrooms, including the one where the boy was hiding, the teen's aunt said in a GoFundMe page.

"As they entered the room where my nephew was hiding in the closet, Rex came out with the little strength he had left in him and threw himself at them as he knew my nephew was in danger," Susy Cadena wrote on the page.

The thieves opened fire, shooting Rex multiple times. He was struck in the neck, leg and knee, yet managed to survive, KCPQ reported.

"My nephew was protected by his eternal friend until the last bit of strength he had in him to do what his unconditional, loving instinct told him to," Cadena wrote, calling Rex a "hero dog."

The intruders fled the home as they heard the sound of approaching police sirens; they were gone by the time responding officers arrived at the scene.

The dog was taken to an animal hospital in critical condition and was later transported to BluePearl Veterinary Partners. Rex remains in the veterinary intensive care unit, but his condition has since been upgraded to stable, KIRO reported.

His owners, who have already shelled out $2,000 of their own money for medical expenses, are trying to raise funds to pay for the surgery Rex needs to save his life.