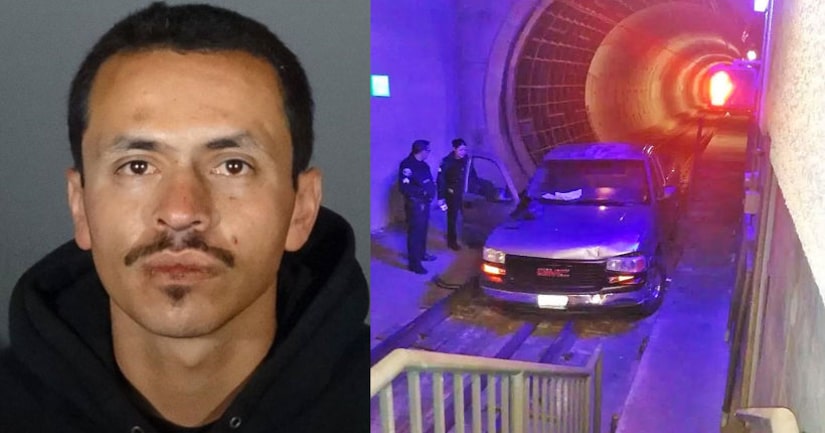 LOS ANGELES -- (KTLA) -- Police have identified the man who was arrested after a pursuit driver became stuck on train tracks in a Metro Gold Line tunnel and say they are still searching for a female passenger involved in the incident.

Rafael Lopez, a 27-year-old Los Angeles resident, was arrested Tuesday after leading officers on a chase for more than an hour, Huntington Park police said in a news release.

The incident began around 9:45 p.m. when a stolen vehicle was reported near the intersection of Salt Lake and Gage avenues in Huntington Park.

Lopez did pull the GMC pickup over after police caught up with him near Randolph Street and Miles Avenue, authorities said, but he stopped cooperating and fled the area.

At one point, the truck T-boned a yellow taxi cab in Boyle Heights. One of the passengers was taken to a nearby hospital with complaints of pain, but no other injuries were reported.

After the crash, Lopez allegedly drove more than a mile down a Metro Gold line train tunnel at First and Lorena streets, near the Soto Street and Indiana stations, ending the vehicle chase.

“I think it was more than pulling in, he drove in there at 50, 60 mph,” Huntington Park Police Chief Cosme Lozano told KTLA.

The truck was found near a staircase that leads to storage room and hatch used to access the street. While his female companion was able to use the hatch to escape, Lopez was found in the storage area, Lozano said.

The 27-year-old was arrested on suspicion of vehicle theft, felony evading and felony hit-and-run, according to Lozano. Lopez could seen being escorted from the passage around 11 p.m. on aerial video from Sky5.

The woman who was in the passenger seat remains wanted by police, officers said. Authorities did not say what crimes she was wanted on suspicion of, and no identifying information about her was released.