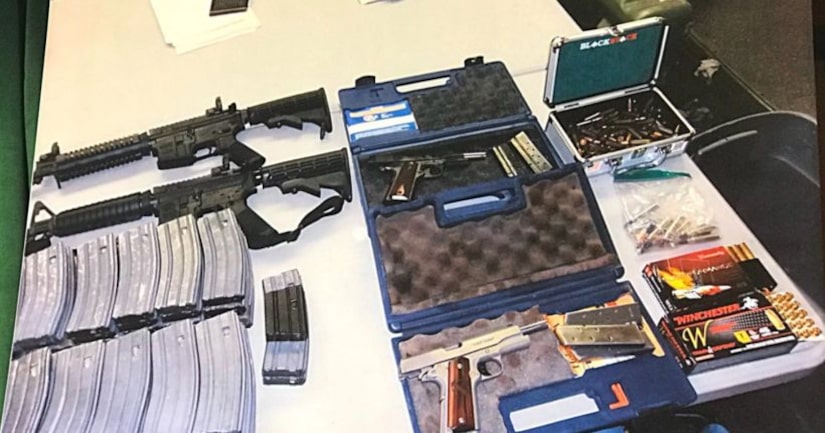 WHITTIER, Calif. -- (KTLA) -- A recent threat to commit a shooting at El Camino High School in South Whittier was thwarted thanks to a safety officer who overheard the "disgruntled" student and alerted authorities, and a cache of weapons was found at the teen's home, the Los Angeles County Sheriff's Department said Wednesday.

Deputies from the Norwalk Sheriff's Station responded to the high school, located at 14625 Keese Drive, to investigate a criminal threats call, a news release from the department stated.

When they arrived, deputies learned a school security officer overheard the student "threaten the occurrence of a shooting at the school," the release read.

The 17-year-old apparently threatened to bring a firearm to the continuation school's campus after a disagreement with a teacher over headphones he had with him at the time, said Robert Jacobsen, the general counsel for the Norwalk-La Mirada Unified School District.

Students were headed to back to class after lunch break when Marino Chavez, a school safety officer who was been with the district for 28 years, overheard the student mumble the threat.

Chavez went over to the student to confirm what he heard, that within three weeks there would be a school shooting on campus, he recounted at a late-morning news conference on Wednesday.

The student apparently indicated he was going to “shoot up the campus,” though he didn't issue a threat against any specific individuals, according to Jacobsen. He described El Camino as a small, alternative school, with more than 200 students enrolled.

As Chavez moved to get authorities involved, the teen tried to walk back the comment.

“He did say that he was just kidding, he did not mean it. I said, 'Well you can't say those things on a school campus,'" Chavez recalled.

The safety officer questioned the student and brought him to the administration office. He also searched the teen for weapons but found none.

Meanwhile, law enforcement personnel were called to the scene to aid in the investigation.

“Early reporting is important,” Chavez said. “In the incident at El Camino High School, I felt it important to immediately contact the Sheriff's Department. There was a swift action that could possibly prevent another tragic event.”

The suspect had an extensive disciplinary history at the school, and investigators learned a Smith & Wesson semi-automatic weapon was registered to his home address in Norwalk, Sheriff Jim McDonnell said at the news conference.

A search warrant was served at the teen's residence where authorities discovered two AR-15 rifles, two handguns and 90 high-capacity magazines, according to McDonnell. The weapons were found unsecured in the home, meaning any resident -- adult or juvenile -- had access to them.

The teen's older brother, a 28-year-old Army veteran, told investigators that the firearms were his, and had been legally purchased in Texas and sent back to California, the sheriff said. One was registered to the man and another was unregistered, which is a felony in the state, McDonnell added.

Authorities arrested the student on suspicion of making criminal threats, he said. The department is not releasing his name due to the suspect's age.

The brother, identified as Daniel Barcenas, was also arrested and faces several charges, including possession of an assault weapon, import of high-capacity magazines, criminal storage of firearms and failure to register a personal handgun, according to McDonnell.

The sheriff credited "attentive" school resource personnel -- in particular the safety officer -- as well as "diligent" investigators, with preventing what he said could have been a dangerous outcome.