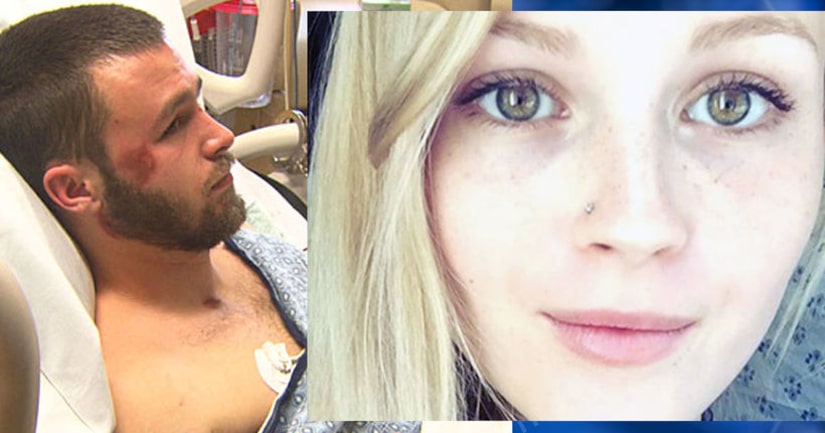 MILFORD, Mass. -- (WBZ) -- A young man was arraigned in his hospital bed Monday after police say he killed his girlfriend, then stabbed his parents at a restaurant over the weekend.

Benjamin Walsh, 24, was arrested Saturday night and spent the weekend in Milford Hospital.

A not-guilty plea was entered on Walsh's behalf and he is being held without bail.

Investigators say he stabbed his girlfriend, 20-year-old Olivia Bergstrom, in the apartment they shared in Needham, then went to a restaurant in Millis and stabbed his parents during a family birthday party.

Witnesses say Walsh walked in, armed with a knife, yelled profanities and lunged at his mother, stabbing her in the stomach and then his father, also in the stomach.

The witnesses told investigators Walsh was yelling "I want to kill you! I'm going to kill everyone!"

Court papers said five men restrained Walsh when police arrived. He allegedly yelled profanities at the officers and threatened to kill them as well.

Laura Walsh was in serious condition at Brigham and Women's Hospital in Boston Monday.

Walsh's father was treated and released.

Police said Walsh's mother Laura was on the floor bleeding with people pressing restaurant linens on her stomach. Then someone at the restaurant expressed concerns for Walsh's girlfriend, which led police to the couple's apartment, where she was found with more than a dozen stab wounds and was pronounced dead.

According to the court documents, police suspected Walsh was under the influence of drugs and/or alcohol.

A probable cause hearing is scheduled March 14.