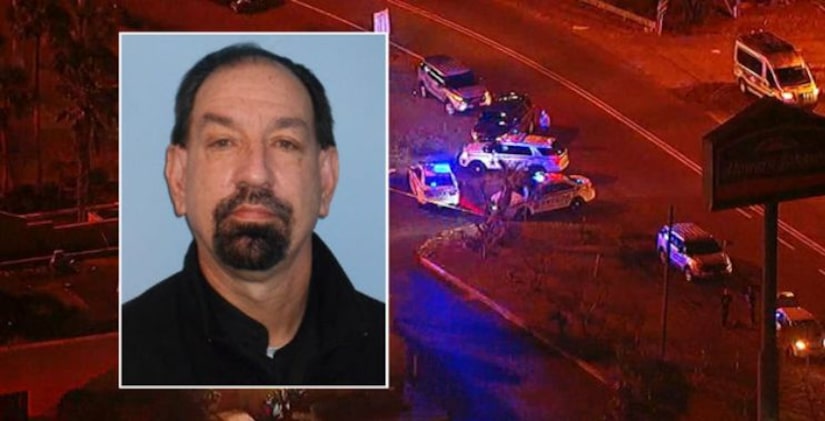 ST. JOHNS COUNTY, Fla. -- (WJXT) -- A man wanted for arrest in New Hampshire for aggravated battery of a child was shot and killed by federal and county law enforcement officers early Tuesday evening at a hotel on State Road 16, just off Interstate 95 near the St. Augustine outlet mall, authorities said.

Sheriff's Office Cmdr. Chuck Mulligan said they were attempting to arrest James Hobbs, 59, from Stratham, New Hampshire, who was wanted by the Amherst Police Department for aggravated sexual assault of a child under the age of 15.

News4Jax has learned that Hobbs, who was once an attorney, was on probation for apparently stealing large amounts of money from several of his clients.

Mulligan said two marshals and St. Johns Deputy M. Toubaili encountered Hobbs at the door of a second-floor hotel room, where he refused to comply with commands. Mulligan said when Hobbs took an action that prompted all three law enforcement officers to fire multiple times.

"He made some very sudden moves that three officers all perceived to be a threat at the time," Mulligan said.

Mulligan said Hobbs was apparently tracked down the East Coast by marshals and found his vehicle at the hotel. Mulligan said there was no indication that Hobbs had any contact with law enforcement in St. Johns County before Tuesday night.

Although investigators said Hobbs did not have a weapon, News4Jax crime and safety analyst Gil Smith said it appears officers were left with no choice but to use deadly force.

"It's not like it was just one officer," Smith said. "Several officers fired. So he did something in a very aggressive way to cause the officers to defend themselves."

Smith said it appears law enforcement had multiple ways of tracking him to the hotel.

"His name may have come up when he registered here. They could have tracked him by his cellphone," Smith said. "Some family members of friends may have informed law enforcement that he was here if he contacted someone he trusted and provided that information."