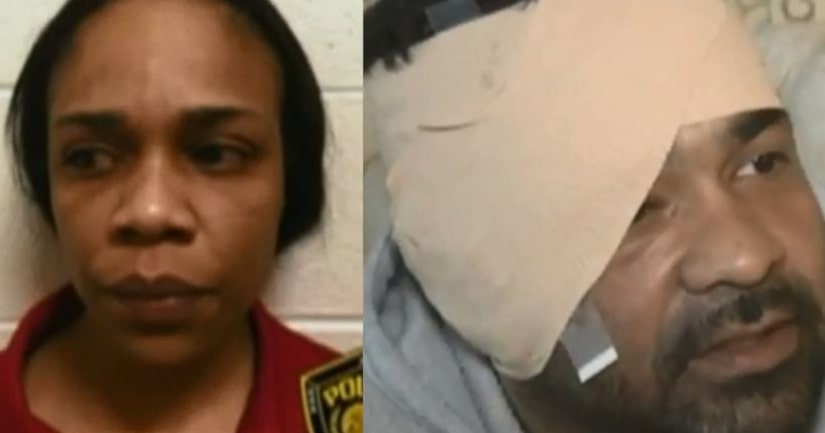 DAVIE, Fla. -- (WPTV) -- An enraged employee at a truck stop in Broward County threw scalding hot water in her manager's face after she was fired Friday, causing a physical altercation and leaving the supervisor with severe facial burns, police said.

Surveillance video caught the incident at the 595 Truck Stop on 2705 Burris Rd. in Davie, Fla., which began when Jondre Thomas, 33, was confronted about stealing money from the business, according to an arrest report. The CEO and vice president of Truck Stop suspected Thomas of grand theft, who left the meeting under the impression she was getting fired, the report said.

Once outside, Thomas began talking with Claudio Salcedo, her supervisor for the past five months. She accused Salcedo of trying to get her fired, police said, and tossed boiling hot liquid straight into his face.

"You clearly see her throwing this cup of hot water right in his face," Davie Police Sgt. Mark Leone said.

Infuriated, Salcedo ran after Thomas and a physical fight ensued, the report said. Surveillance footage shows other employees and witnesses trying to break up the brawl.

"I was in shock, I was in shock. I felt some sizzling immediately," Salcedo said. "She just got me in the corner there of the store by surprise, approached me and told me some quick words and said, 'You've been trying to get rid of me' and immediately after the boiling water case to my face."

Thomas fled the scene, but police arrested her at her home on Friday. She is being charged on one count of aggravated battery, according to an arrest report.

Salcedo suffered second-degree facial burns as a result of the incident. His eye was also injured in the attack.