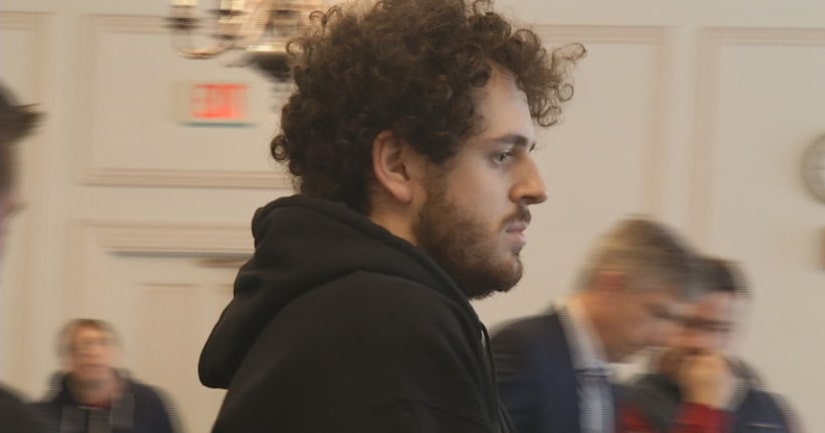 PORTSMOUTH, R.I. -- (WJAR) -- A former student at Portsmouth High School ordered students to line up against the wall after assaulting a gym teacher, according to a report released Friday by police.

The report notes that a teacher heard Marcus Schlip, 22, banging on the gym doors at Portsmouth High School Tuesday morning.

When gym teacher Risha Pelligrino opened the door to redirect Schlip to the main office, he punched Pelligrino in the head and kicked her multiple times in the arm while she was on the floor.

The report states that Schlip demanded students to line up, saying he was now in charge, and then left for the main office.

School resource officer Maddie Pirri responded to the gym, where Pelligrino told her that she saw the suspect running toward the main office. When Pirri arrived at the main office, she saw Schlip sitting there.

“As soon as I entered into the office, he was sitting down at the first chair,” Pirri told NBC 10 News. “I asked him if he was the one who was just in the new gym and he had denied being in the new gym at that point.”

Pirri said Schlip appeared confused -- yet calm -- and was arrested without incident.

“At that point, he was just saying things that didn't make sense at all,” Pirri said.

Pirri found a large, military-style knife in Schlip's duffle bag. She was thankful no students were injured.

After Pirri arrested Schlip, she went back to the gym and found the students hiding. She said the students were “hysterical at that point, very emotional, distraught. They were in shock.”

Pirri said Pelligrino and a substitute teacher had previously ordered students to lock themselves in a locker room.

NBC 10 asked Superintendent Ana Riley why the teacher opened the door to Schlip, a former student at the school. Riley said the teacher had an error in judgment and assumed Schlip was at the wrong door. When she recognized her mistake, the superintendent said Schlip tried to physically bar the teacher from entering the gym.

When asked why Schlip was allowed to enter the main office, Riley told NBC 10 there was a lapse in communication.

“The main building was not notified that there had been an attack or a lock-down in the gym until after Officer Pirri came to the main office and took him into custody. We are very fortunate this could have been a much worse situation,” Riley said.

Investigators said the motive is unknown, while Schlip was ordered to undergo a mental health evaluation.