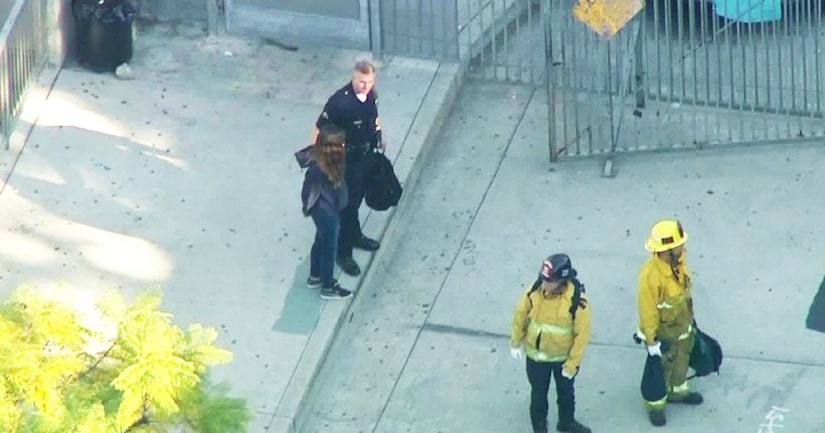 LOS ANGELES -- (KTLA) -- Two students were shot, and at least three others were wounded, after a shooting in a classroom at Sal Castro Middle School in the Westlake district on Thursday morning, and a 12-year-old girl is in custody, authorities said.

Emergency personnel from several agencies responded to the middle school, located in the 1500 block of West Second Street, after receiving reports of a possible shooting inside a classroom shortly before 9 a.m., Los Angeles School Police Department Chief Steven Zipperman.

The middle school is located on the campus of Belmont High School and located near downtown L.A.

The boy, who was shot in the head, is in critical but stable condition, according to the Capt. Erik Scott of the Los Angeles Fire Department. The female victim had a gunshot wound to the wrist and is in fair condition.

Three others were also injured as the result of “peripheral stuff,” bringing the total number of patients to five, Zipperman said.

The ages of the other patients were 11, 12 and 30, according to the Fire Department, which dispatched 50 firefighters and seven ambulances to the scene.

Four of the victims were transported to Los Angeles County USC Medical Center, and all four are in stable condition, a hospital spokesman said.

The Los Angeles Police Department, which also responded to the school and is the lead agency in the investigation, identified the suspect as a 12-year-old girl. School police Sgt. Edward Bernal told KTLA earlier in the day, and after she was taken into custody, that she is a student.

Sky5 aerial video showed two officers escorting an apparently handcuffed female off the campus and to an awaiting LAPD patrol car, where she was placed in the back seat. It was still unclear whether she was the one considered a suspect in the incident.

“The school has been declared safe at this point. There is no more safety threat,” Zipperman said.

Classes are expected to resume as normal once the lockdown is lifted, and counselors will be on campus to assist the students impacted by what the school police chief described as a “traumatic” incident.

It was not immediately known how the shooter was able to get the weapon on campus, Bernal said, noting that the school conducts random weapon checks.

Authorities were also investigating how the individual was able to access the gun.

It was not immediately known how many students and staff were in the classroom at the time.

A staging area is being set up in the area of Belmont Avenue and Beverly Boulevard for parents, guardians and members of the community to ask Los Angeles Unified School District officials any questions. A hotline has been set up for parents of students at Sal Castro Middle School, and can be reached by dialing 213-241-1000.

"Our thoughts and prayers are with those who were hurt in today's shooting incident at Sal Castro Middle School and with all the students, families and employees on the campus."

"The Los Angeles Police Department, Los Angeles Fire Department, Los Angeles School Police and District leadership immediately responded, and we followed protocols to ensure the safety and well-being of the Castro Middle School community. The school has been declared safe, and we are communicating with parents of students at Castro Middle School, as well as neighboring campuses. We are also providing appropriate supports to those who may be impacted by the incident."

"We have set up an information center at Beverly Boulevard and Belmont Avenue, where parents, guardians and community members can receive updates, information about school dismissal procedures, as well as counseling services."

"We are fully cooperating with the Los Angeles Police Department in its investigation of this matter."