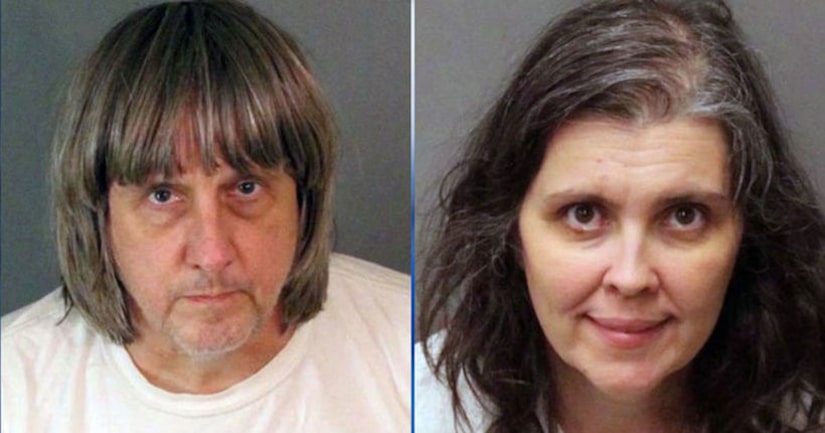 LOS ANGELES -- (KTLA) -- The Riverside County District Attorney's Office in Southern California will go to court Wednesday to seek a judge's order that would bar David and Louise Turpin from contacting their 13 children before their torture case goes to trial.

A public defender for David Turpin told CNN that his office generally does not oppose protective orders.

"This case is outside the range of the average," David Macher said Tuesday afternoon. Macher said he would need to review the prosecutors' proposal with other attorneys and his client before deciding how to proceed.

CNN also reached out to Jeff Moore, the attorney for Louise Turpin but didn't get an immediate reply. A spokesman for the DA's office, John Hall, said he could not discuss specifics before the hearing.

Authorities have accused David Turpin 56, and Louise Turpin, 49 -- whose children are between 2 and 29 years old -- of beating, choking and tying most of the siblings up as punishment. Prosecutors have not alleged the 2-year-old was tortured. The parents allegedly deprived the children of water and fed them small portions of food on a strict schedule.

The 29-year-old child weighed just 82 pounds, prosecutors said and the other children are so thin they all look younger than their actual ages, authorities said.

The children -- seven adults, six kids -- are in the hospital, recovering from years of alleged abuse and neglect.

The charges cover the time that the Turpins have lived in Riverside County -- 2010 to the present.

As the criminal case proceeds, the future of the children will likely be decided in another courtroom.

The process to terminate parental rights is determined in dependency court, and birth parents have the right to contest the termination, Amy Heilman, director of foster care and adoption at the Children's Bureau in Los Angeles, told CNN last week.

In a heart-wrenching Facebook post, a former classmate of the oldest Turpin sibling recalled that she was picked on as a grade school student in Texas, the Associated Press reports.

Taha Muntajibuddin, who attended kindergarten through third grade with her in Fort Worth, Texas, described her as “a frail girl, had pin-straight hair with bangs, and often wore the same purple outfit.” After learning of the case, he shared on Facebook his “overwhelming sense of guilt and shame” over how she was treated.

He wrote that it was jarring to learn that the girl, who was teased in school for being smelly, “quite literally had to sit in her own waste because she was chained to her bed,” the AP reports.

Muntajibuddin said he is hopeful his former classmate can recover and lived an enriched life.

He said despite being bullied by her peers, she “was still one of the most pleasant people I have had the opportunity to meet. She had this whimsical optimism to her that couldn't be dampened, couldn't be doused no matter what anybody threw at her.”