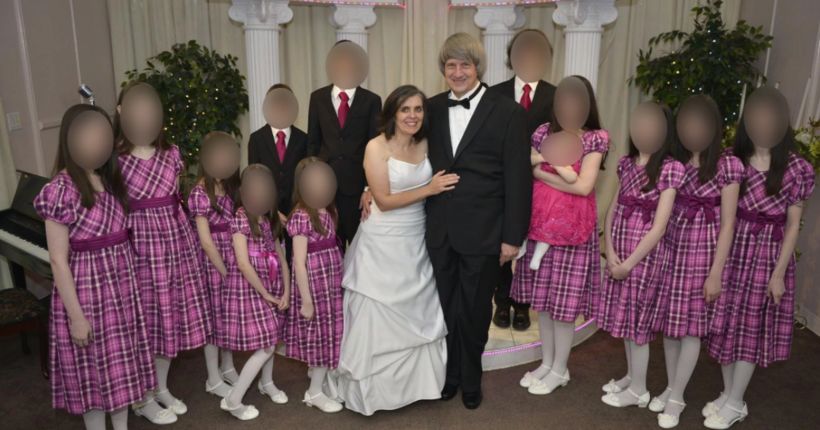 KTLA
This photo was posted to a Facebook page for “David-Louise Turpin” on July 10, 2016.

But the pictures posted on social media obviously don’t tell the full story of what authorities say was going on in the Turpin family household.

Children chained to beds. Filthy conditions. Adults so malnourished they looked like kids.

The disconnect between the cheerful photos and the ghastly reality is a gap investigators will try to fill in after the parents, David Allen Turpin and Louise Anna Turpin, were arrested over the weekend, accused of abusing and holding their 13 children against their will in a California home.

Saying ‘I do’ — again and again

Lots of folks get married or renew their vows in Las Vegas, but the quickie wedding chapels on the Strip rarely see this: vow renewals with the happy couple’s 13 kids in tow; the boys in identical suits and the girls in matching outfits.

The Turpins renewed their marriage vows at the Elvis Chapel in Las Vegas in 2011. They came back in 2013 and 2015 with the kids.

In one ceremony, the girls, wearing the same purple plaid dresses and white shoes, lead the processional, and the boys, wearing dark suits, stand with their father.

An emotional David Turpin can be seen repeating his vows in the video. The children laugh along with the Elvis impersonator, and the couple kisses as their daughters clap.

In another photo, shared on the couple’s Facebook account, the family sports matching “Thing 1” and “Thing 2” shirts — just like the characters in Dr. Seuss’ book “The Cat in the Hat.” But each shirt is numbered for every sibling, so there’s Thing 3, Thing 4, Thing 5 and so on, all the way to Thing 13.

The red shirts stand out against the blue sky in the background. Once again, it’s smiles all around. The boys have bowl cuts. The girls’ locks are long and flowing.

A photo from 2015 shows the Turpins with an infant.

Louise Turpin looks delighted holding the child, while her husband stands next to her beaming against a sea green background.

On their Facebook page the couple also shared photos of the family’s trips to Disneyland. The Turpins had yearly passes to the amusement park.

On Sunday, a 17-year-old girl managed to escape from the family’s home in Perris, California, and called 911 from a cell phone she found in the house, police said. She claimed her 12 brothers and sisters were being held captive inside the home by her parents, the Riverside County Sheriff’s Department said.

When police arrived, they found a sickening scene: Children shackled to their filthy beds with chains and padlocks. All of them were malnourished, and seven of the older siblings, who are in their 20s, didn’t look like adults at all.

Authorities located what they thought were 12 children, but were “shocked” to…