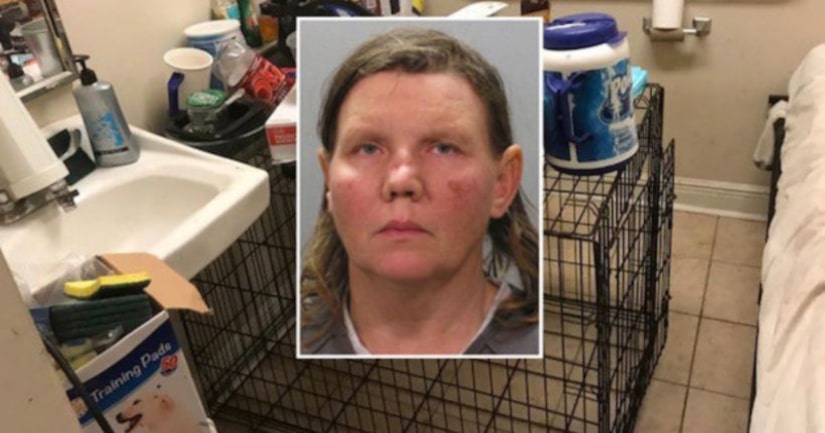 JACKSONVILLE -- (WJXT) -- A St. Bernard puppy had to be euthanized and seven other dogs seized by Animal Control after they were found living in filthy conditions without food and water, according to the Jacksonville Sheriff's Office.

Several of the dogs were severely emaciated when they were found in a kennel on Union Street downtown, police said.

The dogs were found after police responded to reports of stolen vehicles and possible animal cruelty in the area, according to Seeber's arrest report.

Police said Seeber was spotted driving a stolen car at a warehouse on East Union Street, and after she was arrested, officers asked if she wanted to arrange for someone to come care for the animals she said were living in the warehouse with her.

News4Jax found a bed and a large crate in a bathroom cluttered with items at the warehouse. One neighbor told News4Jax that Seeber had more than 20 dogs at one point and some of them died.

According to the arrest report, the officers called Animal Control as soon as they saw the emaciated condition of the eight dogs they found in the warehouse.

Animal Control responded and had to euthanize a 4-month-old puppy that was near death and seizing, police said.

The other dogs were chained up without food or water, and one had duct tape on its legs for what Seeber called a “spider bite,” according to police. Police said feces and urine were everywhere.

Seeber was told she was being charged with animal cruelty and agreed to surrender the dogs to Animal Control, according to the report.

JSO also found an active animal cruelty warrant for Seeber's arrest in Brazoria County, Texas. Officials have not responded to requests to learn why she was facing that charge in Texas.