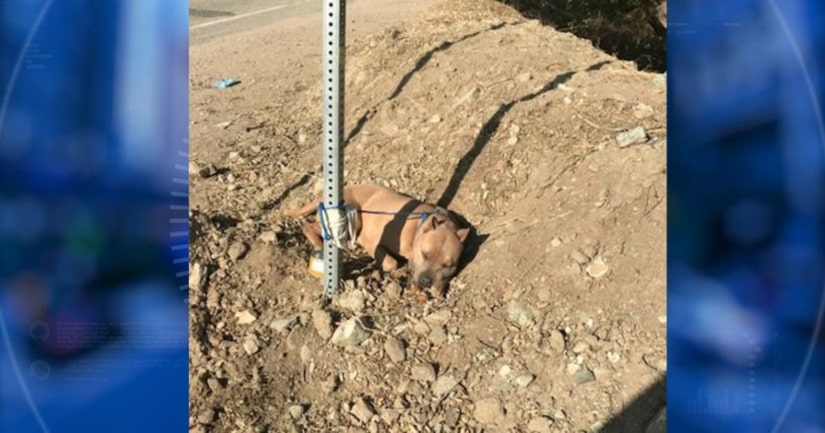 SAN BERNARDINO COUNTY, Calif. -- (KTLA) -- An abandoned and apparently neglected dog is on the mend after being found tied up on the side of a road in Mount Baldy on New Year's Eve, a non-profit animal welfare organization said in a statement Wednesday.

The Inland Valley Humane Society and SPCA dispatched an officer to the scene responded to the scene after the organization received a call about 2:30 p.m. Sunday.

When rescuers came upon the dog, an approximately 4-year-old pit bull, he had no food or water and was "suffering from injuries consistent with neglect," the Humane Society and SPCA said in a news release.

It was unclear how long the dog had been there, but rescuers told KTLA he blended in with the environment, making it potentially difficult for someone to spot him.

"Good citizens saw him driving past, took a double take, backed up and said, 'Oh my gosh, there's a dog there,'" Dr. Cynthia Kinney with the Inland Valley Humane Society told KTLA.

He was transferred to the Humane Society's care after receiving emergency treatment for a large mass in his reproductive area.

Staff have since named the dog "Chance," and he appeared healthy and active as he interacted with staff at the Pomona facility on Wednesday.

More tests still need to be performed on the dog, but it is possible he will be up for adoption soon.

While it is still not known why Chance was abandoned, Kinney speculated that whoever owned the dog might not have been able to afford him and hoped someone else would find him.

James Edward, the operations manager at Inland Valley Humane Society and SPCA, added that the organization is hopeful that the owner or owners will come forward so they could find out the true story.

Anyone with information about the dog is urged to call the Humane Society's investigative department at 909-623-9777.