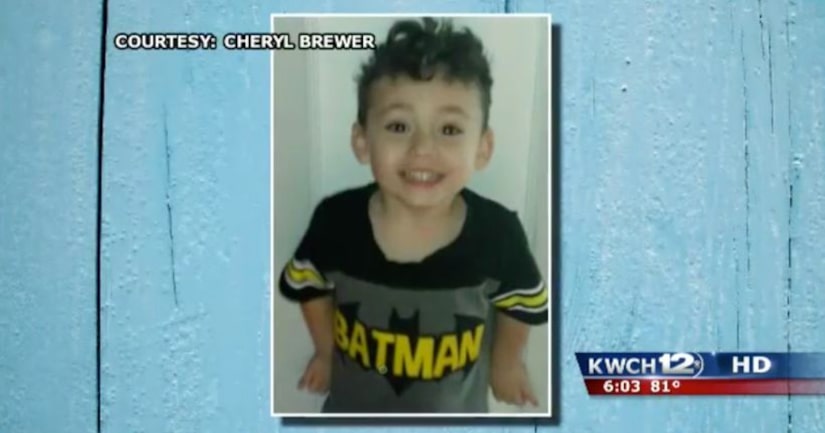 WICHITA, Kan. -- (WDAF) -- Video images of a 3-year-old Wichita boy being severely abused months before his body was found encased in concrete in the home where he lived with his mother and her boyfriend were described in the police documents backing up the mother's and boyfriend's arrest.

The images appear to show the abuse was happening while the boy's father was frantically trying to get the authorities to intervene.

Among the images is one of Evan Brewer being kept nude on a concrete floor with a belt around his neck and his hands tied behind his back, according to a police affidavit released last week in the arrest of his mother, Miranda Miller, and her boyfriend, Stephen Bodine, The Wichita Eagle reported. That image was time-stamped March 12, which was about two months before authorities believe the boy died.

Miller and Bodine are charged with murder. Mark Orr, who has served as their attorney, didn't immediately reply to a Tuesday voicemail from The Associated Press seeking comment.

Amid a custody battle, Evan's father, Carlo Brewer, contacted the Kansas Department for Children and Families and police with concerns. Although some police and one judge did everything they could to help Evan, the rest of the child protection system failed the boy, said Shayla Johnston, a Brewer family spokeswoman.

The new leader of DCF, Secretary Gina Meier-Hummel, is calling for a thorough review of the agency, including how to better prevent the deaths of children in contact with the agency.

“We are bound by court order to not discuss case specifics once the records have been sealed, as they have in this case,” DCF said in a statement. “But as is clear from the affidavit, this innocent child died an unspeakable death for which there can be no excuse.”

In addition to the video images time-stamped March 12, there was a May 19 video showing more abuse. It isn't clear why the abuse was recorded.

Evan's family is horrified by the abuse described in the affidavit, Johnston said. From March 13 until May 2, DCF received four reports that Evan was being abused, she said.

“I consider that torture,” said Johnston, an attorney and a cousin of Evan's father.

Carlo Brewer obtained a protective order prohibiting Bodine from being around Evan on May 4 and another order on May 18 against Miller requiring that the boy be turned over to his father, Johnston said.

The family thinks Evan died between May 8, when he was photographed alive, and May 26, when the affidavit says Miller bought concrete and a trowel.

On Sept. 2, the landlord of the home where Miller and Bodine had been living found Evan's body encased in a slab of concrete in the laundry room. He was wrapped in a bed sheet with Ninja Turtle characters, the affidavit says.