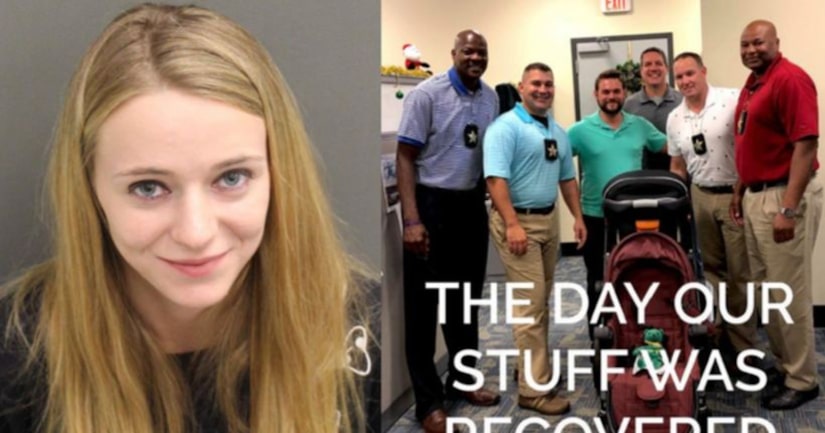 ORANGE COUNTY, Fla. -- (WKMG) -- A woman accused of stealing a stroller from a family enjoying an outing at Walt Disney World was tracked down after she posted pictures of the stolen property on Facebook, the Orange County Sheriff's Office said.

Victim Dave Diaz wrote in a set of lengthy Facebook posts about how the incident unfolded, starting with how the stroller was snatched and ending with the day he was reunited with his family's belongings.

Diaz wrote that he went to Magic Kingdom on Sunday with his wife and two small children. They parked their stroller while they rode Under the Sea - Journey of The Little Mermaid, but when they got off the ride, the stroller was gone.

"Our first thought was that a cast member moved it to make some room. We search everywhere we could. No stroller," Diaz wrote.

Panic started to set in as Diaz realized it might have been stolen. He wrote that the stroller contained the car seat they needed to safely get their children home, diapers, baby wipes, jackets, blankets and other essential items.

Several Disney cast members helped Diaz and his family and worked effortlessly to recover the stroller, but eventually they realized it was best to turn the matter over to the Orange County Sheriff's Office. An off-duty deputy filed a report and the case was assigned to Detective Jesse Hinson.

In his Facebook post, Diaz applauded Magic Kingdom cast members for going above and beyond to make sure his family was comfortable as they waited for Diaz's brother-in-law to bring a new car seat so they could go home.

"The reality is that of course, both (my wife) and I are incredibly upset about the whole thing, (but) good thing this happened at Disney. Nowhere else could we have had such an incredible experience during such crappy circumstances," Diaz wrote.

The next day, Diaz found that someone had posted a Facebook Marketplace ad to sell the stroller, complete with the toys attached to the handlebars of the car seat. The problem was, Diaz had no proof that the stroller was actually his.

"Anyone could have bought my exact same setup and built it the same way. Highly unlikely, but possible. We need hard evidence that, that specific stroller and car seat belonged to us. We needed a serial number, or even our names etched into it. Something unique. But we just didn't have it," Diaz wrote.

Hinson told Diaz when they spoke Tuesday that he would need some kind of proof that the stroller was his; otherwise the case wouldn't stand up in court and he wouldn't be able to get his property back.

Diaz's wife realized they still had the base to the car seat in their vehicle and when they checked they found it had a serial number on it, which they then handed over to Hinson.

Diaz said he lost hope when he saw the stroller was marked as "sold" on Facebook Marketplace and he was unable to get in contact with Hinson. Then the detective called and asked him an odd question.

"'Do you have the receipt for the new car seat you bought?' I ask him for what, a bit confused. He responds with, 'Because I want to make sure that you can return it. We've recovered your stuff!' I literally cannot believe what I'm hearing," Diaz wrote.

Hinson said he used a fake Facebook account to message the seller, later identified as 24-year-old Amanda Poyner, and set up a meeting to buy the stolen goods Wednesday morning.