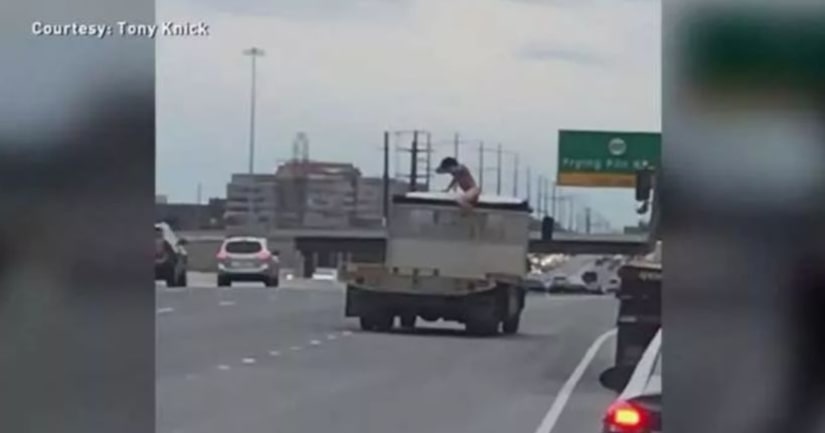 FAIRFAX COUNTY, Va. -- (WXIX) -- What originated as a three-vehicle accident led to a fight between two men, one of whom stripped naked. In the video, a man is seen striding down busy Route 28.

“I see a man walking between cars, and I'm thinking there's been an accident and he needs help,” said witness Nina Johns. She had seen an accident, but that was only the beginning.

Police say moments after ramming his pickup into two vehicles, 32-year-old Jose Gonzalez Flores began punching one of the other drivers.

“He walks past my car, punches my door with the side of his hand, and he's got something else in his other hand,” Johns said.

Gonzalez was carrying a cutting tool. But he didn't get back into his car, Johns said.

“Instead, he climbs over the barrier and gets undressed and comes back into traffic, buck naked,” she said.

After stripping nude, the man jumped onto a moving flatbed and started hitting the cab with the cutting tool. A chopper and canine search led to the man, who had landed in a drainage ditch in some nearby woods. Officers could not tell what prompted the man's unusual actions.

“We're not sure if he was having a medical emergency after the accident, or if possibly he was under the influence of drugs or alcohol,” said Officer Kent Bailey.

It was a commute that drivers, including Nina Johns, won't soon forget.