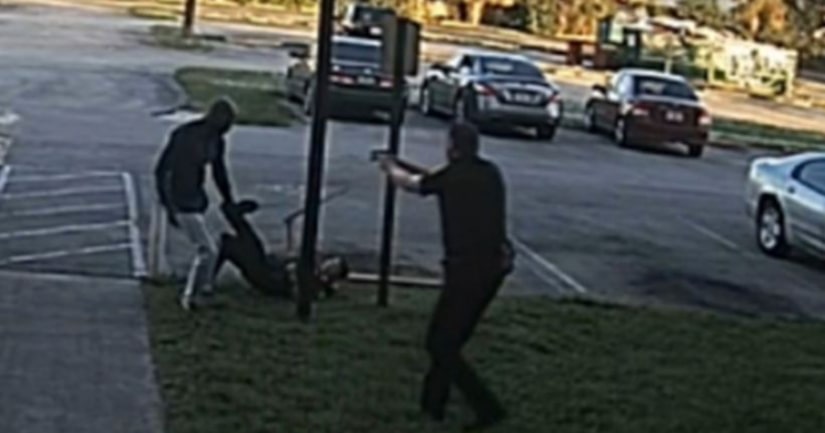 FORT LAUDERDALE, Fla. -- (WPTV) -- WARNING: Some may find the video above and below to be disturbing.

A man who was killed by a deputy in Lauderdale Lakes is seen kicking and dragging another deputy moments before he's fatally shot in new cellphone and surveillance videos.

"There's a guy fighting with two cops," a woman tells a dispatcher in 911 calls of the incident released Friday.

Officials said Deputy Sean Youngward responded to a disturbance at the scene and was confronted by Pierre, who attacked the deputy.

The videos show Pierre dragging Youngward on the ground, while a second deputy, Steven Briggs, points a gun at him, trying to get him to stop.

"They're gonna shoot you man," a witness is heard telling Pierre in the cellphone video. "Let him go, you're gonna get yourself in bad trouble."

Youngward is seen trying to break away from Pierre by using his baton as Pierre has a hold of his leg.

"Tase him, tase him, don't shoot him," another witness is heard saying to the deputy.

Pierre suddenly drops Youngward's leg and starts to run, and that's when three shots were fired by Briggs. Officials said Pierre charged at Briggs, but added that Pierre wasn't armed.

"Deputy Sean Youngward was attacked by Mr. Pierre. He was punched, he was kicked and he was knocked to the ground," Broward Sheriff Scott Israel said at a news conference Friday. "It was a violent encounter."

The footage then shows Pierre alive, laying on the ground, as officers approached him with guns drawn.

One of the officers then bends over to check Pierre's condition. The officer put on gloves and approached the suspect, while another approached him with a gun. A few minutes later, an officer was seen administering CPR to the victim.

Broward Sheriff Rescue officials took Pierre to the hospital, where he later died.

Officials said Youngward used his Taser but it didn't stop Pierre from attacking him.

"He did everything he could to save himself and to end this confrontation, he was overwhelmed by the superior size and strength of Mr. Pierre," Israel said.