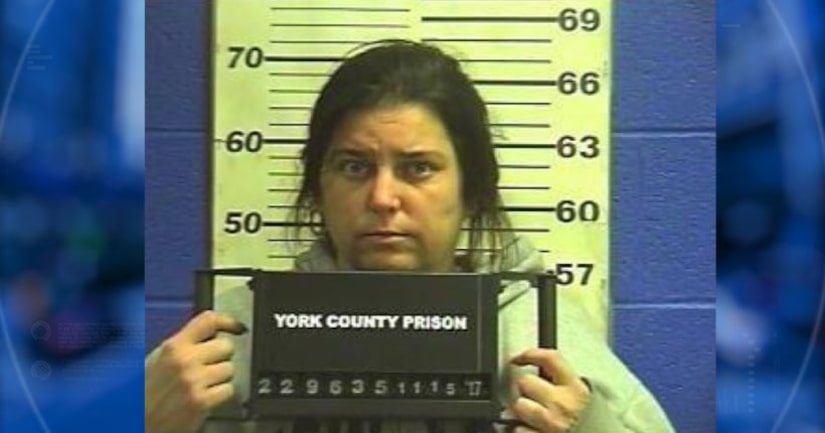 YORK COUNTY, Pa. -- (WPMT) -- A Florida man had to throw his girlfriend's shoe out of his truck window to get her to stop attacking him, according to a police arrest report.

Stacey Stringfellow, 43, of Sarasota, FL, was charged with strangulation and harassment, the arrest affidavit says.

The incident happened Tuesday at 11:30 p.m. at a distribution warehouse on the 4800 block of Susquehanna Trail North, according to Northern York County Regional Police.

Police were called to the location for the report of a woman who was standing on a loading dock, screaming about being assaulted by her boyfriend, police say. The initial report said the woman was wearing one shoe.

An officer made contact with the woman, later identified as Stringfellow. She told police that she and her boyfriend, Nathaniel Huger, had driven up from Florida that morning. She said that she was searching through his email when she found evidence that he was cheating on her. When she confronted him, they began arguing in the warehouse parking lot. Stringfellow said Huger bit her right wrist during the argument and that she somehow sustained a scratch on the side of her head during the altercation as well.

Stringfellow said she had been to the hospital earlier that day to get her psych medications, and that Huger left with them in his possession. She said she wanted the medication back, police say.

While police were speaking to Stringfellow, Huger returned to the scene and remained in his truck, the arrest affidavit states. When police talked to him, he had a different version of events.

According to Huger, Stringfellow became irate when she confronted him about his infidelity. During the confrontation, Huger said, Stringfellow got out of the passenger seat, went behind his seat, wrapped her arm around his neck, and began choking him. Huger said he was unable to breathe, so he moved his mouth up and down on her wrist, using his teeth in an attempt to break her hold.

Once he freed himself, Huger said, he threw one of her shoes outside the truck in an attempt to get her to exit the vehicle. Huger told police his ploy worked; Stringfellow left to truck to retrieve her shoe, and Huger drove off out of fear for his safety.

FULL STORY: Florida man throws girlfriend's shoe out of his truck to stop her from strangling him, police say - WPMT