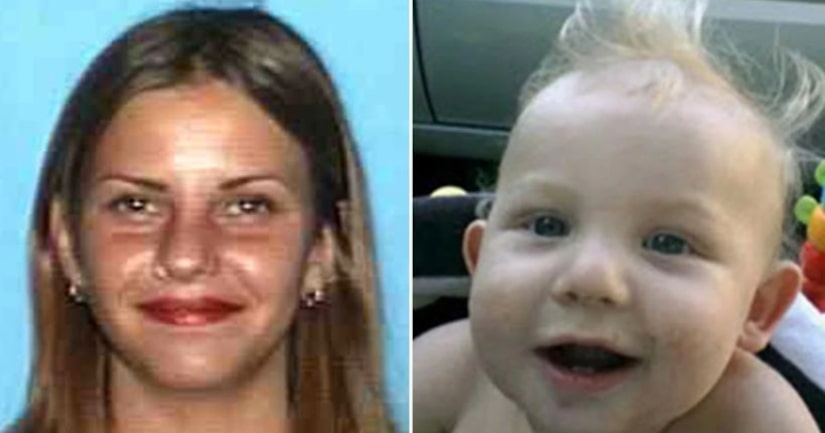 OREGON -- (KCPQ) -- A few months ago, as he was serving a life sentence for killing his cellmate in an Oregon prison, Thomas Riffenburg got what he would later describe as a “smack on the head from God.”

Riffenburg said God was telling him what he did was wrong, he told authorities.

But the divine intervention was not about the case in which he'd stomped a fellow inmate to death.

It was about something else: The disappearance of his girlfriend and baby boy, who had not been heard from since they were reported missing in 2009.

Riffenburg, 31, wrote a letter to a special agent with the Oregon Department of Justice.

He offered to provide her with “dates, times and location of the missing persons.”

When the two met face-to-face in June, Riffenburg handed the agent a pair of hand-drawn maps, each revealing a grave.

“I did it,” Riffenburg said, according to court documents obtained exclusively by CNN. “They both suffocated to death.”

Riffenburg's confession, recounted in a search warrant affidavit filed in Los Angeles Superior Court, would provide answers to loved ones who had been wondering for eight years about the fates of Jennifer Anne Walsh and her 16-month old son, Alexander.

But the details of his revelation would bring the family a new kind of torment as well.

The following account is based on court affidavits filed by LAPD homicide detectives working on the case, and an interview with a family member of the missing woman and child.

On the morning of January 11, 2009, Joanne Fern walked into a Los Angeles police station to report her daughter, Jennifer Anne Walsh, missing.

Walsh, 23, was a petite blonde — she stood just 4 feet 11 inches — with a pierced nose and a tattoo of a marijuana leaf on her back. She had a soft spot for those in need, her mother would later recall.

Fern told the officer who took the report that Walsh had last been seen by her boyfriend, Riffenburg, who had driven her to an unemployment office in Los Angeles' San Fernando Valley.

Fern provided the officer the account she said Riffenburg had given her: Walsh had been caught with a bag of marijuana inside the office. Fearing the drug possession could lead authorities to take her child, she hurried out to her boyfriend, who was waiting in her van, and told him to drive away with the boy.

Riffenburg brought Alexander to Fern's house in the L.A. suburb of Palmdale, about an hour north of the city, she told the officer.

Fern waited nearly three days — the amount of time she believed was required to file a missing persons report — before driving to the police station. She told the officer who took the report that she had not had any contact with her daughter since Riffenburg last saw her at the unemployment office.