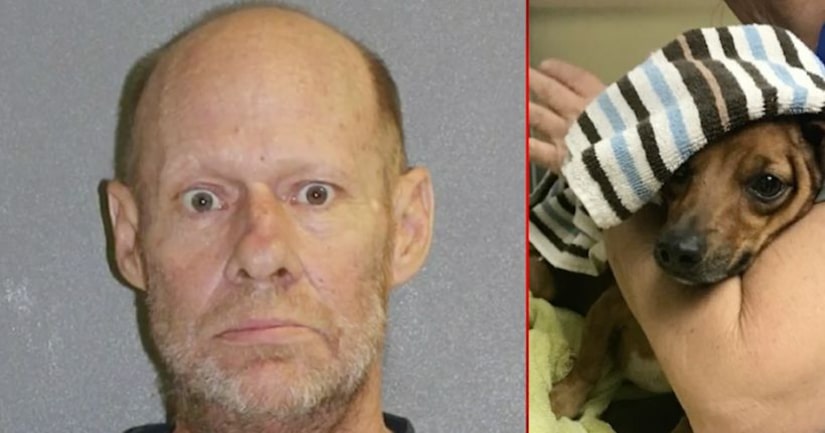 DAYTONA BEACH, Fla. -- (WKMG) -- A Daytona Beach man threw a firework at his neighbor's dog Tuesday, causing the pup to lose its leg, according to officials with the Daytona Beach Police Department.

Police first responded to Pineapple Road Tuesday morning for an animal complaint about a dog running loose, but when police arrived, neighbors said Madison Carroll, 58, had thrown a firework at a dachshund named Oscar. The dog's owner had already left for the animal hospital with the 15-pound dog, police said.

Carroll told police that his neighbor's two small dogs had been running around in his yard and were "always aggressive toward him and other people." He also accused the dachshund of trying to bite his niece before the firework incident, according to the report.

Police said there are no prior animal complaints of the dog getting loose before this incident.

Carroll's niece told police that she was never afraid of the dog and that it was scared "as small dogs usually are when you try to pet them." She said the dog ran away and she called the dog back over to her, according to the report.

About 45 minutes later, Oscar, the dachshund, came back into Carroll's yard. Carroll told police the dog grabbed his cat, but did not hurt it. He said he then went inside his home and retrieved a M80 firework and threw it at the dog, trying to get it to leave his yard. M80 firecrackers are sometimes called cherry bombs for their small red appearance.

"When the firework exploded, the dog was right next to it," according to the report. "The dog, now heavily bleeding from his leg from the explosion, ran away."

Another neighbor told police Carroll told her he was "getting rid of the damn dogs" and then laughed, according to the report.

Oscar lost his foot and will need to have his leg amputated as well, police said.

Police said a firework of that size could have killed the dog had it picked it up with its mouth.