Joshua Lelevier, 39, was convicted by a Pima County Superior Court jury on Nov. 29, 2018 of first-degree murder, abandonment of a dead body and two counts each of sexual exploitation of a minor, domestic-violence-related surreptitious recording and voyeurism in the May 2017 slaying of 13-year-old Jayden Glomb.

Lelevier was sentenced Monday, January 14, 2019 to life in prison without the possibility of release, plus an additional 34 years. He automatically faced a sentence of natural life in prison, The Arizona Daily Star reports.

The search for a missing Tucson teenager leads police in a disturbing direction. And cameras are rolling as her mother is surprised by detectives.

The unforgiving desert doesn't easily give up its secrets.

On the morning of May 10, Jayden Glomb vanished.

Did she get lost in the wilderness outside Tucson, Arizona? Did she run away with a boyfriend? Or did a predator kidnap her?

Jayden was a typical 13-year-old girl in the seventh grade. She loved dancing.

It was theorized that Jayden might have run off with a friend. But sadly that isn't the case.

Jayden's body was found just hours after she disappeared in the Tucson suburb of Vail. She was face down. Her clothing was torn. The medical examiner says Jayden Glomb was strangled to death.

Tucson detectives broke the sad news about the autopsy to Jayden's mom Jessica. The death was ruled a homicide.

Detective: "What do you feel happened?"

Jessica: "Good question. I feel like you're saying that he did this."

The "he" Jessica is talking about is her husband, Jayden's stepfather, Josh Lelevier. Jessica is pregnant with his child.

Jayden reportedly told a friend six weeks before her disappearance that she was "super scared" of her stepdad. That friend spoke to police investigating the case.

Cops press Jessica for more details about Josh's background. He has three ex-wives.

Down the hall they bring Josh Lelevier into the interrogation room and handcuff him to the table and search him.

Cops show Jessica images from surveillance video they claim that shows Lelevier's Dodge Charger driving through the area where Jayden's body was found.

Police say Lelevier denied being in the neighborhood. Then they tell Jessica what evidence they found in her car.

"We processed that inside of the car. There was a large smear of blood that had been cleaned up in the back of the Chevy Traverse, and that matched the DNA as well."

In the search warrant obtained by Crime Watch Daily, cops seized a spy camera and nude images and/or video of adults or juveniles. Cops claim they found "peep holes in the wall between the den and the hall bathroom." Investigators say Lelevier used his computer in the den.

"He would tell me how she would tell him stuff and so to me I thought their relationship is that she confides in him," Jessica told detectives.

Cops claim on a computer he had access to they found "an image depicting a young female, believed to be Jayden Glomb, in the bathroom of the residence wearing a sports bra."

At this point Lelevier has been cuffed in the interrogation room for four hours and 22 minutes. Then detectives walk in and tell him his fate.

"So what's gonna happen is we're gonna take you down to the Pima County Jail. You're gonna be booked on first-degree murder and abandonment and concealment of a dead body."

A grand jury indicted Josh Lelevier on eight felony counts, including first-degree murder, and surreptitious photographing, videotaping, filming or digitally recording or viewing. Lelevier is accused of using a "spy camera" to film Jayden during her most intimate moments.

And now Lelevier is locked in his cell in the Pima County Jail. He's held on $1.5 million bond. Lelevier has pleaded not guilty to all charges. His trial is set for July 2018.

Jayden's school held a candlelight vigil for Jayden, with friends and neighbors in the stands, their eyes filled with tears. It's hard to say goodbye to the little girl who touched so many hearts taken way before her time.

Joshua Lelevier, 39, was convicted by a Pima County Superior Court jury on Nov. 29, 2018 of first-degree murder, abandonment of a dead body and two counts each of sexual exploitation of a minor, domestic-violence-related surreptitious recording and voyeurism in the May 2017 slaying of 13-year-old Jayden Glomb.

Lelevier was sentenced Monday, January 14, 2019 to life in prison without the possibility of release, plus an additional 34 years. He automatically faced a sentence of natural life in prison, The Arizona Daily Star reports. 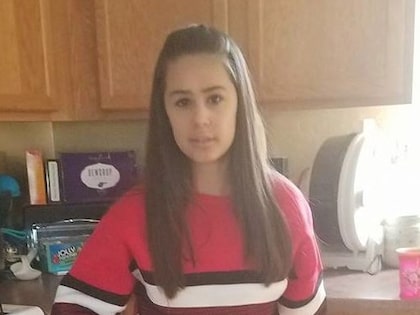