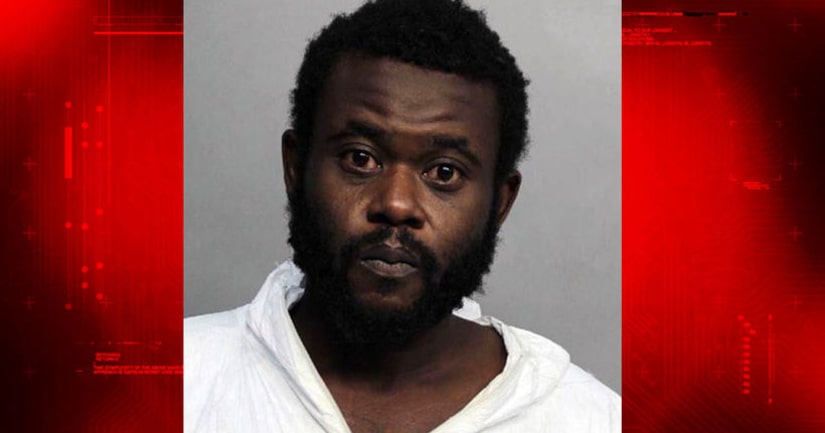 WARNING: Some of the details of this story may be disturbing to some readers.

A Miami man was arrested after he tried to tell police that the mutilated body of his girlfriend was really a blow-up doll made of flesh, an arrest report said.

Jerome Ernest Wright, 32, was arrested Saturday in connection with the death of his girlfriend, 52-year-old Deanna Clendinen, according to the Miami-Dade Police arrest report.

The report said officers responded to a home in the 6200 block of Northwest 23rd Avenue for a report of a foul odor that was reported by Wright's mom, 62-year-old Della Rosalie Wright.

Della Wright told officers that she lives with her son and that the odor was coming from his room. As officers approached his room, he came out naked and sweaty and said he had a stomach ache, the report said.

Officers checked the room and saw what appeared to be bodily fluids on a trash can and a mattress, the report said. When they checked a closet, they found a body wrapped in sheets and clothing.

Della Wright said Clendinen frequently stays at the home and said she last saw her on Oct. 24 going into Wright's bedroom, the report said. She said on Friday, Wright ran out of his bedroom complaining of a stomach pain, and that's when she noticed the foul odor coming from his room.

She said she asked Wright what the odor was and he said he saw a rat in the room, had diarrhea and that the dog defecated on the floor, the report said. She noted that he smelled like blood, the report said.

Later on, she smelled a foul odor in the garbage can in the kitchen and took the trash to the outside garbage bin without looking inside, the report said.

After he was taken into custody, Wright denied that there was a dead person in the closet and said whatever was in his room was not real, the report said.

"The defendant stated that there was a life-size blow-up doll in the closet and that the doll is made of flesh," the arrest report noted. "The defendant advised on several occasions that if you find something in my room it's from the internet."

Investigators said they could smell "a strong odor of human decomposition emanating from the defendant," the report said.

The body found in the closet was later confirmed to be Clendinen. The body had a large laceration to the abdomen where her organs were removed, and the organs were found in the trash can outside, the report said.