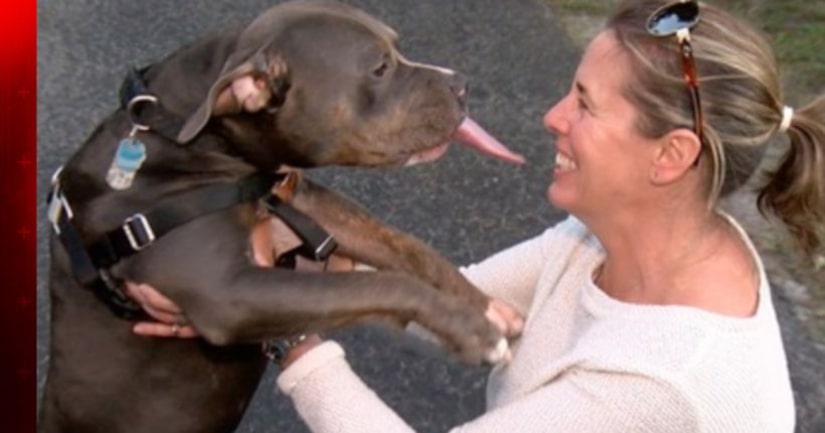 PASCO COUNTY, Fla. -- (WPTV) -- Since Sept. 18, nothing's felt right for the Wilkins family after their beloved family dog “Dom” was stolen out of the front yard of their Pasco County, Florida home.

“I immediately felt violated,” Jennifer Wilkins said. “When they left his collar here and took him it's the worst feeling in the world. And not knowing if we'd ever get him back, you lost a little bit of hope every single day.”

Dom was a Christmas gift, Joe Wilkins said he's had dogs before and always loved his animals. But, the connection he made with Dom was different. Unable to cope with the emotions of losing his dog he took to social media to try and raise awareness about his stolen pup.

“I made a post and just typed my feelings and that post just kind of went crazy from there,” Joe Wilkins said.

The post had nearly 160,000 shares. Other similar posts garnered thousands of shares, likes, and views.

“They seem to go viral every time I make them,” Joe Wilkins joked.

After a month fielding hundreds of phone calls, the Wilkins felt defeated. Then someone did call and they actually did have Dom with them.

“I couldn't breathe,” Jennifer Wilkins said. “I just lost it. I knew he was coming home it was a rush of emotion.”

Joe rushed over to pick Dom up. He did a quick Facebook Live of their reunion. Joe said it is the power of social media that saved his dog's life.

The Wilkins think that Dom was stolen to be used in a dog fighting ring or to be a stud dog. They think Dom's theft got so viral on the internet that whoever stole him realized he was worthless to them.